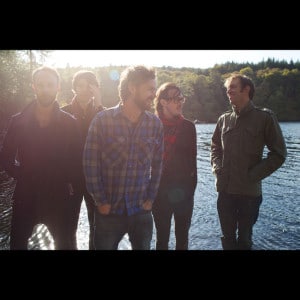 Almost two decades since they formed, Idlewild have consistently done what you wish all long-standing indie bands would: change, evolve, take a lengthy period off when they run out of ideas, come back with a really strong new album and not be too ashamed to play the hits.

On the one hand this is a band substantially removed from the messy Dischord/SST-indebted ball of noise of their early gigs. There’s been a personnel change and the new line up is a reflection of the new material, suited to folk, Americana and warm ’70s rock. Thus the core trio of (double-denim clad) singer Roddy Woomble, guitarist Rod Jones and drummer Collin Newton are joined by new hands Lucce Rosse (mostly keys) and Andrew Mitchell (mostly bass) and live-addition Hannah Fisher (mostly fiddle). The three swap between guitar, keys and bass and provide rich backing vocals, meaning for the first time the band are augmented by five-part harmonies.

Opener Nothing I Can Do About It, a beautiful rendition of album closer Utopia and Every Little Means Trust (a song that, even by Idlewild standards is heavily indebted to mid-period R.E.M.,) all benefit. More than that, Idlewild 2.0 give old favourites a new gloss: Roseability, Live In A Hiding Place and You Held The World In Your Arms are genuinely glorious in this guise, their innate warmth brought to the surface through the harmonies and Fisher’s beautiful fiddle mixed right at the front of the sound. El Capitan and American English, not short on anthemic qualities anyway, pack an emotional wallop tonight too, both inspiring big sing-alongs from an audience that clearly hold the band in fond regard.

On the other hand traces of the ramshackle punk band still remain, and not just during early singles Film For The Future and Captain, both played with plenty of discordant punk energy, if somewhat toned down vocals from the much-matured Woomble. It’s not just because the chart-bothering indie hits are here either; Live In A Hiding Place, Little Discourage and a barn-burning Modern Way Of Letting Go are all greeted like old friends. It’s the spirit of endlessly creative, messy art punk that’s never left them. Jones and Mitchell engage in a ridiculous duel guitar outro on (Use It) If You Can Use It, while live current single Collect Yourself imbibes some of the fizz and bang of the band’s older work.

Idlewild nearly became one of those bands put to the back of your mind, partly because of their patchy mid-2000s work (mostly overlooked tonight), partly because of their long break, and partly because their rise to mainstream success never completely crossed into the national consciousness, with the spotlight – as Woomble said in a recent interview, and much to his relief – moving on to the likes of Franz Ferdinand. Yet tonight is a reminder that this is a band we should be treasuring, with a bulletproof songbook and real forward momentum. What’s more they’re still deeply loved, which is proved as the crowd pick up the “woah-oh-woah” refrain from Love Steals Us From Loneliness, moistening eyes around the room and leaving those onstage noticeably moved.