by Neil Dowden
published: 2 May 2010 in Live Music Reviews
Tweet 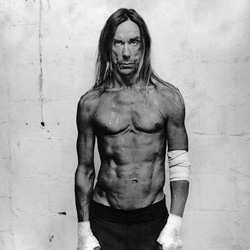 Five years after the newly re-formed Stooges played Fun House at Hammersmith Apollo, the legendary rockers were back at the same venue to perform their seminal 1973 album Raw Power, a legacy edition of which has recently been released. Of all the Stooges albums it was this third, proto-punk work, controversially produced by David Bowie shortly before the band split up, that had the most influence on future musicians.

Tonight, strangely, the tracks are played out of order, with no pause for breath, before going on to other Stooges material and songs from Iggy’s solo catalogue, so the integrity of the album is slightly compromised. But when the performance is as passionate and committed as this, it matters not a jot. Instead, the intensity of the music takes over.

As the band jumps straight in with the high-voltage Raw Power, the incredibly energetic 63-year-old Iggy bounds on to the stage like an electrically charged puppy – and continues to pump it up for the rest of the show. The down and dirty Search And Destroy is followed by the rest of the album, including the darkly seductive Gimme Danger and the raucously rocking Your Pretty Face Is Going to Hell.

Other earlier classic Stooges songs like the psychedelic Fun House and the sado-masochistic I Wanna Be Your Dog, when Iggy gets down suggestively on all fours, mix with lesser-known ones such as Open Up And Bleed, Cock In My Pocket and Johanna, as well as tracks from Kill City (Iggy’s 1977 collaboration with guitarist James Williamson). But tellingly there’s nothing from the Stooges’ lacklustre 2007 comeback album The Weirdness.

Iggy’s long oval face may be creased and his trademark flowing locks may look a bit ridiculous dyed blond, but his torso, quickly revealed when he rips his shirt off after the first song, is amazingly muscular and taut. With his unbelted low-low-rise jeans somehow still clinging to his buttocks without indecent exposure, he struts and cavorts on stage as much as he always has. Thankfully his self-harming days are over – he no longer cuts himself on stage – but he still gives his all, if not in blood then in sweat.

Iggy’s audience interaction is famous. As well as stage-diving several times, he also climbs off the stage to get close and personal with the mosh pit at the front, virtually drowning in the sea of fans but managing to carry on singing. For Shake Appeal he invites a stage invasion, with about 30 people dancing around him dementedly. The frenzied crowd reaction shows in a high body count as crowd surfers are ejected by security.

If Iggy’s voice seems in as good a shape as his body, the band also impress. Original Stooges guitarist Ron Asheton died last year but, in a macabre reprise of 1973, he has been replaced by the scintillating axeman Williamson, who co-wrote the Raw Power songs with Iggy. Survivors Scott Asheton on drums and Steve Mackay on sax are joined by Mike Watt on bass.

In 90 minutes of raw power it would have been nice if the wattage could have been turned down a notch or two sometimes so that more detail could be heard in the music, but this was an electrifying performance from a bunch of sixtysomethings still somehow in their prime. It’s great to see Iggy And The Stooges belatedly receiving the recognition they deserve after all these years.

Iggy And The Stooges MP3s or CDs

Iggy And The Stooges on Spotify