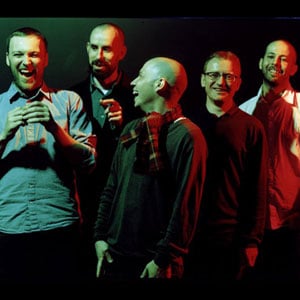 The line up for the opening date of this years London Ill Be Your Mirror event featured performances from the likes of Slayer, Sleep and Melvins and a similar level of heavy-guitar sounds infiltrated the second day of action at Alexandra Palace. Partly curated by ATP and partly by Scottish post-rock heavyweights Mogwai, the line up for the Saturday was weighted firmly in favour of established/returning bands.

American trio Floor ensured the day began on an uncompromising, noisy start rewarding the healthy crowd that had eschewed the glorious sunshine outside to gather inside the West Hall. Next, the first use of the smaller Panorama room saw Irmin Schmidt from Can present selections from Lost Tapes, their forthcoming compilation of rarities/recently discovered tracks. The resulting sea of nodding heads in the crowd was testament to the pulsating, percussive brilliance of many of these pieces. Back in the West Hall, Harvey Milk made an early claim for loudest band of the day their tar-black, sludgy riffs allied with drumming that practically erupted from the stage resulted in their metal-as-catharsis providing the first of many aural assaults to be experienced throughout the day.

Switching once more to the smaller stage, the laptop-generated synthscapes of Antoni Maiovvi produced rare outbreaks of dancing amongst the crowd (even by long-haired dudes in Slayer t-shirts). Maiovvi cavorts loosely around the stage, adding hoarse vocal embellishments whilst using a handheld Wii controller to manipulate the sounds. It occasionally suggests early Depeche Mode and while it may have been an instance of ATP admirably trying to programme younger, more contemporary acts it didnt really sit comfortably with the rest of the day. We return to the West Hall (and back to more familiar musical ground) to see Chavez take to the stage, led by a baseball-capped Matt Sweeney. It is clear from opening track Top Pocket Man that they wont match Harvey Milk for sheer volume or impact but they charge through their raw-nerved 45 minute set regardless, equal parts battered energy and bruised power.

Timings mean we can only catch the opening two tracks of The Soft Moons set but the buzzing electronic undercurrents of their updated take on Krautrock certainly make a favourable (if brief) first impression. The long-awaited return of Codeine is a draw that is hard to resist however, and their set is undoubtedly one of the highlights of the day. They sound more nuanced and introspective than everyone else on the bill today, aided especially by the softly delivered vocals of Stephen Immerwahr. The emotionally scarred, intensely wrought beauty of their two albums is shown off by tracks like Tom, Pick Up Song, Cave-In and Pea. They thank Mogwai for not taking no for an answer, on a number of occasions, embrace each other then slip off the stage quietly.

Bill Wells & Aidan Moffat draw one of the biggest crowds to the second stage, providing a timely reminder of the brilliance of last years Everythings Getting Older album. Helped by a backing band featuring double bass, violin and trumpet they play every track from it, as well as their unique, superbly lethargic take on Bananaramas Cruel Summer. The brutally honest self-examination of Ballad Of The Bastard and poignant storytelling of The Copper Top stand out, as does the unsettling claustrophobia of Dinner Time (although slightly less effective when delivered in the sun-drenched Panorama room). Moffat is on good form throughout, commenting on how he looks and sounds better in the dark, whilst declaring how hed rather be next door watching Mudhoney (sadly, the only band musicOMH is unable to catch today). He then dedicates The Greatest Story Ever Told to children (and proceeds to call them all something quite unpublishable).

Over the last decade Dirty Three have built up a reputation for being one of the best live bands and their performance tonight proved their recent time away has done nothing to diminish this. From the opening track Rain Song Warren Ellis is a mercurial, transfixing presence, whether indulging in his reliably surreal, extended song introductions or launching into a series of high kicks whilst wrestling sound from his violin. They play two further tracks from current album Toward The Low Sun -Sometimes I Forget Youve Gone is ratcheted up to new levels of intensity while The Pier demonstrates how their music can extract a visceral, physical response whilst simultaneously conveying moments of sublime beauty. It also showcases the captivating drumming of Jim White, who seemingly has a magnetic allure on Ellis, who for most of the set faces the drum kit, drawn in to the maelstrom of sound, back to the crowd. Ellis does occasionally break off into shamanic exhortations, arms flailing as he bellows out primal howls. They play two older tracks the exhilarating Some Summers They Drop Like Flies and The Restless Waves, before closing with Ashen Snow.

Putting Mogwai’s progression over the years into words is not a simple task. After 2008s The Hawk Is Howling it was almost tempting to suggest they had found a more ‘mature’ sound but it is not as straightforward as this (and would ignore the subtlety and varied instrumentation that was present in early days on first two albums). Tonight, they opt to play a set that encompasses most of their career, from the abstract, electronically augmented opener Sine Wave to the stentorian guitars of closer Batcat. In terms of albums, slightly surprisingly it is only Come On Die Young that is not represented. They restrict selections from latest album Hardcore Will Never Die, But You Will to a minimum, the towering might of Rano Pano contrasting with the relative melodic consonance of White Noise. Meanwhile, the inclusion of Im Jim Morrison, Im Dead and Auto-Rock show how recent years have seen some of their best work come from piano-led tracks. Hunted By A Freak projects itself with a creeping stealth while Mexican Grand Prix remains one of their most successful vocal tracks to date, tonight featuring Luke Sutherland. Arguably the highlights come from the oldest two tracks performed tonight. Ithica 27/9 is a compact reminder of the quiet-to-loud dynamic they perfected in their early days and Mogwai Fear Satan sounds just as unforgiving as it did on release, tonight razing all that went before it. The omission of certain classic Mogwai tracks may have prevented this from reaching the heights it could have done but it still showed them to be very much a band in the ascendancy, deploying their guitar shock and awe tactics with vigour and precision.