In The City 2009 @ Various Venues, Manchester 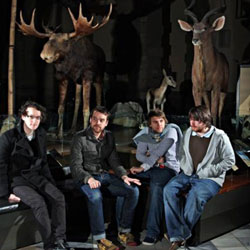 The 100-year-old opulence of Manchester’s Midland Hotel is a bizarrely symbolic setting for this year’s In The City. The brainchild of iconic music impresario and local hero, the late and great Tony Wilson, In The City is still rightly considered one of the world’s most important music industry gatherings.

And if the Midland’s imposing Victorian architecture and lavishly furnished, old-world lobbies and conference rooms represent the ornate traditions and past successes of the music industry, then the buzz and chatter inside its walls is, like the current industry, far more humble and aspirational.

Young Web 2.0-oriented optimists and older businessmen turned youthful e-mercantilists wax lyrical about the limitless possibilities of the “online marketplace”, while traditionalists do their best to remind the young ‘uns about the importance of “albums,” “guitars” and “printing the legend and not the truth.” That’s right. Printing.

While every ITC is an important occasion for the industry’s money-making insiders – affectionately known as “delegates” and put up in the city’s poshest hotel for three nights – and music-loving (nay money-spending) outsiders, there’s the very real impression that this year’s ITC bears more than the normal amount of “Mr Old World, I’d like you to meet my friend Miss New World” significance. Love at first sight? Very doubtful.

The industry, of course, has never been more on the cusp of revolution; but it’s a tentative one, unsure if it should completely wave goodbye to its glorious, NME-enshrined past in favour of new, uncharted and technologically-dependent ventures. And there’s an uncertainty in the air over where exactly on the musical map this ship is supposed to be heading.

So where better then to chew over the music industry’s current indeterminate state than ITC’s many discussion panels? And though the concept of talking about music in a room – refreshingly bereft of MacBooks, iPods and Blackberries – might seem a trifle old hat to some, these mini-music think tanks are the truest realisation of Wilson’s original “education and inspiration” vision.

If not directly discussed, the central themes of P2P downloading (or the dawn-come-acceptance of the free music age), the demise of the non-electronic music format, and the futures of both guitar-based music and “the album” are certainly on the lips of panel members and audiences alike. But the debates focus largely on the ways in which artists and business-headed members of the industry can succeed in these lean times. Oh, and there’s probably a little too much self-promotion. While he wouldn’t be in the least bit surprised, Wilson will have been keen for discussion panels not to turn into tawdry exhibition stands.

From a hack’s perspective, the best panels discuss the music itself rather than the corporate machine that markets and sells it. A plethora of the industry’s more colourful and occasionally controversial characters lay bare their “making it” secrets and regale delegate audiences with stories from Planet Rock and tales of general heroism. Pete Frame’s “I’ve shagged a woman in 25 different American states” confession/boast is a particular highlight.

And yet, despite the temptation to lay accusations of pretension at the door of contemporary music’s great and good, the simple fact is the vast majority of ITC’s panel speakers love music and are able to articulate it without sounding like sanctimonious plonkers. From Peter Hook and Mark Ronson to Mike Smith and Steve Lamacq – this convention isn’t short of big egos, but the overriding impression is a positive one, and of successful music careers based largely on talent, an unswayed passion for music and an I-need-this-even-more-than-I-want-it sense of determination. Surely, the best message for any aspiring musician?

Two of the most interesting panels effectively summarise this year’s ITC. During one, a crack team of hall-of-fame authors laments the declining relevance of the rock music hardback, the NME and the upkeep of the “legend,” while at another, a much younger panel of fresh faces (and cool glasses) enthuses over the music business’ love affair with the Internet and the myriad ways fans or “tribes” can get closer to the band. Having sat through both, one can’t help feel that the closer the fans get, the more The Legend is in danger of being diluted. The hope is that with all this giddy excitement over music’s new dawn, there are, hopefully, enough people still working within the industry that realise the importance of music history – both in terms of the actual music and the way it’s delivered.

Divided among Manchester’s vast array of venues, ITC’s line up of over 50 new and unsigned bands is both a blessing and a major pain in the backside. Yes, there’s choice, but until hover boards come into mass production, there’s very little chance of catching even a small percentage of the acts on show – even with all of musicOMH’s resources at one’s disposal. (That’s right, one writer and a biro). Week-long ITC next time, anyone?

The night starts with one of the event’s headliners at a surprisingly busy Night & Day. Unfortunately, Ou Est Le Swimming Pool‘s Ricky Wilson sings Tellytubbies-electro impression doesn’t exactly inspire the crowd. The place is half-empty for a while, but the introvert-yet-melodious early New Order sounds of local band Egyptian Hip Hop help to bring the smokers in from the cold. The verses from single Rad Pitt sound just like something else. Cue massively irritating night of tip-of-tongue “what the feck is it???” cursing.

Anyway, onwards to the Deaf Institute. The Marple-based new-wavers Dutch Uncles are well-received although stylistically, they have that Bombay Bicycle Club all-over-the-placeness disease. Seeruber Jenny‘s PJ Harvey meets Nico set at the Studio is a good way to end the night. The track Push It Away will hit national radio soon enough.

Bar 38 is the location. Copy Haho are yet another export from beyond Hadrian’s Wall, but their uplifting, conventional indie-pop is a welcome deviation from The Twilight Sad-led rough-hewn Scottish scene. The Onlookers possess a distinctly Kooks-esqe poppiness, and while this may be the cause of the odd frown, they manage to get away with it by way of tuneful charm.

Charming too are The Crookes with their twee, busker-do frolics and plaintive Beirut-esque departures. ITC’s headliners, Frightened Rabbit close the night at Deaf Institute. Although it feels like there’s more sweat than oxygen in the venue, the energetic Scots perform with the confidence of a band now soaring beyond this level.

Chicago Rock Caf is a convenient place to spend most of the night. Silver Gospel Runners‘ take on indie-folk is saccharine-laced, a lot like Belle And Sebastian and better than Noah And The Whale. The jump to the ambient and sense-assaulting experimentalism of Engine-EarZ Experiment is a big one. But it’s a compelling live performance that, given the amount of people on stage, feels more like a well-choreographed dance routine.

Does the world need another thoughtful, reflective troubadour? Well, if it does then it should really be ITC showstopper, Paul Thomas Saunders. His beguiling, voice from-another-time hushes an audience into a mood of quietened bliss. Appropriately, Mount Kimbie closes events with a dark, electronic vision of the future.

If anything, after three enlightening days, music’s future looks pretty bright. On into the next decade.