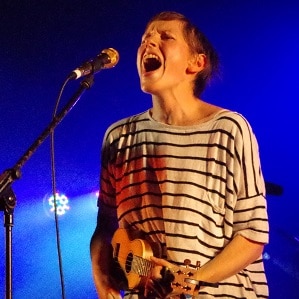 It’s hard to believe it’s been a whole year since musicOMH last set up camp at the Midland Railway Centre in hilly Derbyshire for a weekend full of indiepop, but a glance at this year’s programme reinforces just how much time has passed.

Such is the turnover of bands in the indiepop scene, the whippersnappers of yore have claimed the crown from the scene’s departed big players, and there are already dozens of new bands snapping at their heels. And it’s from these bands, most of whom have yet to release an album, that some of the weekend’s highlights emerge.

That’s the beauty of Indietracks; an anti-establishment roar in a knitted cardigan, it shuns the conventions of most corporate festivals. It’s relatively inexpensive, the bar comes courtesy of the local CAMRA group and money raised goes to the Midland Railway Centre – which hosts the festival – to maintain and renovate its fleet of vintage steam trains, signal boxes and tracks, all of which are open for festival-goers to explore. Workshops include learning to play Talulah by Allo Darlin’ on the ukulele and making a felt bird badge and a cardboard record player. And there’s no space for ego; opening main stagers Skeletal Shakes are interrupted for an announcement about cars blocking an entrance down the line at Butterley station, while a bemused Gruff Rhys is slipped a note, mid-set, with a description of a missing child on it.

This inclusivity extends to the line-up too, for the non-musical it can, at times, feel like you’re the only one not in a band, with countless faces from the indiepop scene dotted across the festival, and many making the leap from fan to performer every year. Indietracks is addictive, it seems. Take Martha, for example. They played last year, and – in order to keep things fresh – bands aren’t allowed to play two years running, so they’re not officially on the bill. But they’re hot property right now, having released their debut album through Fortuna POP! earlier this year, so the record labels who organise acoustic sets in the merch’ tent elbow them in for a Sunday afternoon slot. Elsewhere their other bands are given proper slots; Naomi’s cat-loving grrrl punks No Ditching looking terrified, making a glorious racket whilst glued to the spot, while Nathan and Daniel’s ONSIND cause a storm, with songs more easily filed alongside Martha; quick-fire acoustic punk that tackles subjects like immigration policy, as opposed to Martha’s school yard reminisces.

Let’s Wrestle and the eagerly anticipated Ravioli Me Away pull out at the last minute, the former leaving a bit of a gap in the line-up on the outside stage on Saturday night. As a result, the indoor shed is heaving for a rather lacklustre set from Withered Hand. With a full backing band – including his hero, Black Tambourine’s Pam Berry – much of the angst he builds up alone with his guitar is dampened, and even the anthemic Religious Songs feels curiously a little underdone.

On probably the hottest day of the year, Thyme Machine frontman Kriss Foster takes to the stage in a leopard costume, clutching two lit fireworks. Evading the health and safety bods, he goes on to sing songs about girls and scrabble club, throws teacakes into the crowd and sets off streamers. He’s silly, his songs are silly… and the crowd love it. Similarly, Vancouver’s Thee AHs‘ infectious sense of fun – this time set to a slightly harder, bubblegum sound, draws passers by in.

Perhaps unusually for a festival, new material from some of the more established bands is lapped up. The Spook School start their set with a new track, which suggests a slightly more polished, confident sound that builds on their hyper take on queer issues. One of the most startling moments of their set comes from Nye – usually one of the more shy members of the band, happy to sit back and let drummer Niall steal the limelight – who plays a heart wrenching solo version of Something. Much of the band’s material reflects on Nye’s experiences of being transgender, as they plough heavyweight issues into immediate, pop punk.

Allo Darlin’ headline on the Friday night, playing classics from their first two albums, as well as newbies from their forthcoming third. Again, they’re excitedly received (thanks in part to the two year wait for their latest record). The band pull up former Standard Fare singer Emma Kupa to join them for Silver Dollars, while The Just Joans sing along to a version of their own song, If You Don’t Pull, originally covered – and thus propelled into the spotlight – on this very stage two years ago.

The weekend’s other headliners, The Hidden Cameras and Gruff Rhys, put on equally impressive shows, the former braving a chilly final night topless apart from gold sashes; their set is a weekend highlight, packed full of quirked indiepop anthems. Gruff Rhys shuns conventional festival sets for a run-through of his recent tour, American Interior. Through music and Powerpoint, he tells the tale of a 18th century explorer, John Evans, who goes in search of an alleged Welsh tribe living in America. It’s probably the most entertaining history lesson any of the audience has ever had – and not just because of the weird, imagined puppet version of John Evans, which Rhys perches centrestage for the entirety of the show. It’s an ambitious idea, but one that’s pitched perfectly for a woozy, warm evening like this. Gentle but immersive, the crowd are lost in his story.

With David having also performed with The Spook School, The Just Joans might have felt ready for home by the time their own set came around on Sunday afternoon. Along with the melancholic pop we’re used to – including a brilliant singalong of the aforementioned If You Don’t Pull and the tearjerking What Do We Do Now – their new material sounds gloriously soaked in glittery pop. Katie, perhaps tellingly, is wearing a Pulp dress and incites an admittedly shambolic performance of Do You Remember The First Time.

It’s a scene repeated that night as Katie takes to the decks with her friends in the punter-organised disco tent on the campsite, a sea of band t-shirts bopping about with a common cause, already planning return trips next year. Indietracks is a precious thing; almost like a secret you want to keep to yourself, lest it become tarnished by “outsiders”, but when something’s this good, you just can’t help but shout about it.