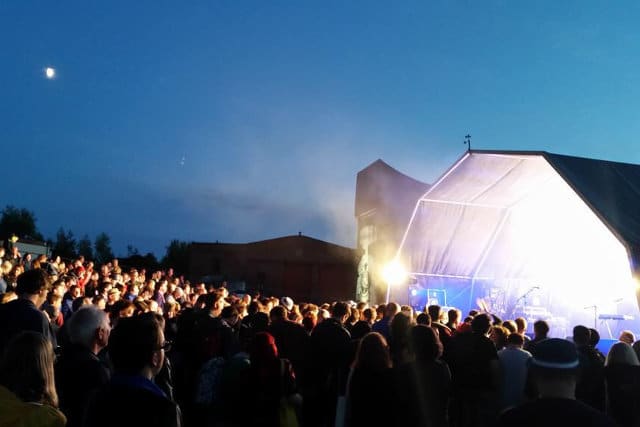 As anyone who’s ever been to Indietracks will testify, it’s not like most festivals. Located in a sort of alternative universe, where steam train rides are what you do to shelter from the rain; a steam roller crushing cans attracts a crowd almost as big as The Wedding Present do, and you can bump into your favourite bands at 3am, dancing in their wellies at the campsite disco.

Set in the geeky idyll of a heritage railway museum, this annual gathering brings together up and coming bands as well as legends of the world of indiepop and DIY music.

Martha for one clearly have an affinity with this place; it was where they cut their teeth four years ago, when, without even an album to their name, they became everyone’s favourite, and it was easier to spot those without a Martha t-shirt than those wearing one. This year they headline the first night to something of a hero’s welcome. Each track is a singalong, a moshalong – even their final song – a cover of Semisonic’s Closing Time.

Not content on playing one set, Martha off-shoot Onsind play an acoustic set in the merch’ tent and it is incredibly timely; beautifully delivered, tender protest songs that feel more urgent and necessary than ever. These shows are always intimate and special – performed as they are in the corner, amongst the 7” singles, tote bags and t-shirts, but this one was even more special. When the crowd weren’t singing their hearts out along with them, you could hear a pin drop in the next field.

The Just Joans are also regulars at Indietracks and brimming with excitement as the rain starts to hammer down, just as they take to the outdoor stage. The phrase ‘bittersweet’ could’ve been coined just for them. Irresistibly melodic, their lyrics flit between being smutty and tongue in cheek to being utterly heart breaking, with their dual – heavily Scottish accented – vocals complimenting it all perfecting. Their new single, released that Friday, goes down well against well worn favourites and songs from their next album, due out early next year.

It’s fair to say The Tuts too are quite excited about their set, which is an absolute whirlwind of a show. Kitted out in wedding dresses, they conducted a marriage ceremony, encouraging the crowd to take part and ‘marry themselves’; performed a version of Wannabe, got a chorus of fellow musicians to join them for a tribute to Linkin Park’s late Chester Bonnington, and then crowd surfed their way into the crowd in the indoor stage. All this in-between their usual set of punk-pop sing-alongs. It was exhausting just to watch.

There’s a fair few oldies on the bill too; The Wedding Present bang out the hits at their usual break-neck speed for their headline slot. Dave Gedge seems to understand he’s amongst friends, making easy chitchat throughout. Likewise, The Orchids seem to forget about the years since their reign as stalwarts of the Sarah Records scene, and throw shapes towards their adoring crowd.

Cate Le Bon might have seemed like a strange choice of headliner, but as it happened she made perfect sense, bringing her warm, at times angular guitars and kooky lyrics and choreography to close the festival on a drizzly Sunday night. It feels like a fitting end to the weekend; it’s unlikely Le Bon was top of anyone’s list of must-sees; she’s hardly indie pop royalty, but she had everyone gripped.

In what felt like a pleasing metaphor for the DIY spirit of the festival, when things got soggy (and they really did get soggy), the waterproofs went on, the umbrellas shot up and everyone just got on with things, finding ways to muddle though. This is in contrast to Y Not festival – just a few miles down the road, which crumbled apart, cancelling bands and shifting the schedule around until eventually pulling the plug entirely on the Sunday. But Indietracks is like that; when most of the organisers decided to step down after last year’s event, a new bunch of regular festival-goers stepped in to keep it going. Even if it were cancelled, Indietracks would probably still happen.