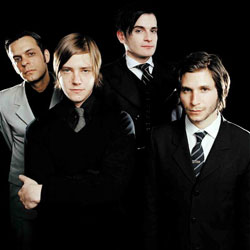 As one of only two UK warm-up dates in preparation for Interpol’s Latitude Festival date, it’s fair to say that there was a sense of anticipation among the Academy crowd.

And when the house lights dimmed, that dry ice billowed and the stage was bathed in a shade of blood-red, you could almost sense the roof about to come off.

Although they remain as gloriously intense and doomy as ever, there are definite signs that Interpol are lighting up. There were hints of it in last year’s Our Love To Admire, and they look positively chipper tonight. If it’s not Daniel Kessler running all over the stage and looking like he’s having the time of his life, it’s a trilby hat attired Paul Banks actually – gasp – smiling and talking to the audience.

Perhaps they were inspired by the energy from the audience – in stark contrast to the last time this reviewer saw the band in Sheffield, the Academy audience are dancing, singing along and generally loving every minute. It’s a point not lost on Banks: “you’re probably the most energetic audience we’ve had on this tour” he noted at one point.

From the eerie opening bars of Pioneer To The Falls, it was clear we were in for something special. It’s the perfect opener – stately, magnificent and leading up to a real ‘goosebumps’ moment when Banks sorrowfully intones “you fly, straight into my heart”. Then it’s straight into Slow Hands, which is the cue for the first outbreak of audience mayhem.

The setlist is pretty evenly split between all three albums. Perhaps inevitably, it’s the older material that provokes the most reaction, but The Lighthouse is a real highlight. The first few minutes are just Banks and Kessler, the latter’s luxuriant vocals bouncing perfectly off Kessler’s shimmering guitar chords, before the rest of the band quietly slip back onto stage to bring the song to its climax. The effect is stunning.

Watching Interpol it’s obvious what an impressively tight band they’ve become. Not Even Jail is particularly good tonight, with Kessler and Banks tearing into their guitars like men possessed, while Carlos Dengler and Sam Fogarino make for the coolest rhythm section in the world.

The intensity was turned up a notch with Evil (hearing 2000 people singing “Rosemary, heaven restores you in life” is quite an experience) before Roland produced more frenzied dancing. An encore saw the wondrously brooding NYC, followed by the unmistakable calling card of “how are things on the West Coast” as The Heinrich Maneuver firmly established itself as another fan favourite.

There was time for one last treat though – several people down the front had been screaming for Obstacle 2, probably in vain as it’s very rarely played live these days. Yet this time, Banks broke into a grin, and bellowed “I’m gonna pull you in close…”. It’s fair to say that the place near enough erupted.

If one could quibble about such a performance, it would be about the songs that were left out – no Stella Was A Diver, no Public Pervert, no Say Hello To Angels. Yet this would be being slightly picky to say the least – those with Latitude tickets are in for a treat.