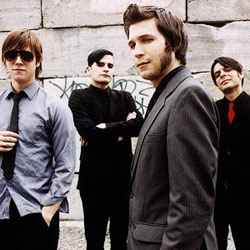 It’s all drama with Interpol. The tailored suits, the scowls, therestless chord patterns and Paul Banks’ clipped, mannered croon. Theyproject an image at once impeccably groomed and emotionally fragile.Theirs is the kind of immaculate, cold faade that hides hundreds oftiny cracks, massive vulnerability shielding its eyes from theflashbulbs even as the cool exterior luxuriates in their light.Emerging from a dense blue haze of dry ice into deafeningacknowledgement, Interpol have no way of failing tonight with thecapacity crowd. Even so, it’s startling to witness the intensity thatthese four young men (plus keyboard player) can generate betweenthem.

They open with Success, the first track on their recent self-titledfourth album, a naggingly addictive upward spiral of tense chordswhich never settle into anything resembling a comfortableresolution. “I’m a good guy,” sings Banks, in the tone of someone whoknows he’s really anything but. “I have succeeded/ I won’t compete forlong.” Even when he wins, Banks sounds like he wishes he’d lost, asDan Kessler’s guitar chops and chimes in what could be read asU2-like fashion, but with far more of an edge than even TheEdge himself could muster these days. They reach back to their secondalbum Antics for the second song, the sweepingly romantic andsuperficially upbeat C’Mere. About as uncomplicatedly happy as thisband gets, it’s still self-aware enough to throw an extra chord-changeor two into the mix just to keep the crowd on their toes. It trulyseems that if Interpol were a facial expression, it would be aquizzical frown (maybe over a half-smile), so regularly does theirmusic pull tiny, subtle tricks on the listener like that.

Leif Erikson plunges the Academy back into the half-light:literally as the dry ice goes mental and the huge row of strip lightsbehind them begin to pulse with an evil will, like a Dan Flavin lightsculpture come to life, shifting into proper disco-strobe action for araging, animalistic Slow Hands. And so begins an early-set surge ofexcitement as every song builds majestically on the last, with greaterand greater emotional weight. The sleazy drug confessional Rest MyChemistry sounds violently oppressive tonight, each drumbeat landinglike a punch. Say Hello To The Angels sounds more like a forgottenSmiths B-side than ever, Kessler’s guitar pealing like JohnnyMarr’s at high speed, Banks cramming as much artful nonsense into eachverse as he can. Mammoth is a juggernaut of sound with faulty brakeson black ice, rising to an almost comically intense finale.

Barricades animates some kids in the front row who stab theirfingers emphatically at the stage on every lyric while the gorgeous,Christmassy NYC bathes the venue in warmth and hugs for a bit. Notfor long though; the melody of Lights is very much a furrowed brow,another of the band’s recent exercises in unrelenting tension thatbuilds to a climax which is at once breathtaking and utterlyemotionally blank, which is quite an achievement. A sudden attack ofcrowd surfing during old favourite Obstacle 1 gives way to areflective, melancholy stretch with the tumbling John Barrychords of Safe Without showcases Banks’ voice ringing like a bell.

They finish the main set with a surging, triumphal Not Even Jailand after a knowingly short interval (encores are such a weird,’I-believe-in-Santa’ ritual sometimes) Banks and Kessler re-emerge forthe slow-building, suspended-in-mid-air serenade of TheLighthouse. As the rest of the band sneak back on stage to play thesong’s almost religious-sounding finale it becomes apparent that thiscould be the highlight of the gig… if they didn’t then obliterate itwith a sucker-punch triptych of Evil (all fierce red lights andattitude), Stella Was A Diver And She Was Always Down (which seemsto last for several blissful, over-wrought weeks), and the coup degrace: early single PDA roaring out of the gate leaving ash in itswake, seemingly causing the crowd to spasm in unison.

It isn’t quite perfection: Summer Well from the new record is abit of a middling placeholder and, as accomplished as their hirsute,compact new bassist is, the lanky, lunging New Romantic frame ofCarlos Dengler is definitely missed. No matter. Interpol have quietlysolidified their place in the current pantheon through low-keypersistence and resistance to the vagaries of style. Banks also seemsto be leaving behind the cool-sounding nonsense of his youth and hislyrics have finally started to resemble narratives, albeit oblique,opaque ones. As they depart the stage one last time, an image comes tomind of them boarding a yacht and disappearing into an F ScottFitzgerald novel, where their patented brand of stiff-upper-lipintensity would appear to be right at home.