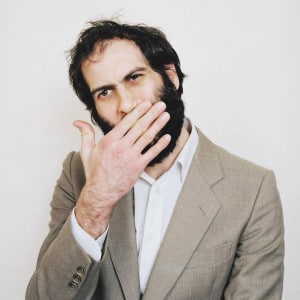 If the Land of Kings festival helped launch the idea of a Dalston Crawl two years ago, the Queen of Kingsland Road festivals has arrived. Called Intersect, it celebrated its triumphant incarnation on Saturday night with a three-venue jamboree that showcased the wildest and most adventurous music on offer in the capital.

From the out-there musical stronghold of Café OTO, the cosy basement bunker of Servant Jazz Quarters and the veteran temple of jazz of The Vortex, the new Intersect festival serves to demonstrate how far a fiver can go by serving up more than two dozen acts spread across the nearby venues. With good scheduling, short walks between venues and no flops on the bills, we caught as many acts as we could muster. Here’s how the night went down.

Kicking off the proceedings at The Vortex with a sled-load of Christmas tunes is Dollyman. The band boasts tunes that seem straightforward enough until they morph into Zappa-esque breakdowns in tonality and humour, with one festive ditty boasting just two words in the way of lyrics, a shouted: ‘Little donkey!’

With our mistletoe safe and secure, a quick walk over to Servant Jazz Quarters sees the certainly less flamboyant but hugely talented Isnaj Dui (real name Katie English) offer a spellbinding display of overlapping electronic loops from her flute, bass flute and a small, homemade stringed instrument as she fires pulses of breath through the microphone to support her otherworldly vibrations. The music veers from a Laraaji-style atmospheric drone with a quasi-spiritual vibe to a Zomby-like klaxon somehow generating from her small rig. In her stocking feet, she creates implausibly dense, esoteric and quietly sophisticated music.

Hopping across Kingsland Road to Café OTO sees the blaring alto sax of Julie Kjaer and tenor of Rachel Musson lead a blistering charge into the unknown while master drummer Steve Noble keeps the ship on course through troubled waters, employing a dizzying variety of trickery with his sticks and cymbals to propel the music. And while the sax attack is effective and purposeful, Noble does a much better job listening to his ladies than they do of listening to him.

Back at Servant Jazz Quarters we find Leon Michener obscured behind an upright piano as he cooks up a special brew of spooky electrified prepared piano in relative anonymity. The processed low end gives it a haunted techno feel that morphs into a demented boogie woogie, before evolving into a crazy reel of plucked strings and an almost gamelan-like assault of tonal freakery.

Returning to our starting point at The Vortex we catch the standout performance of the night from the Impermanence Trio of Matthew Bourne (piano, pictured), Riaan Vosloo (bass) and Tim Giles (drums). Led by the Rasputin-esque looking pianist Bourne, the trio take the template of a traditional jazz trio and impart it with an intoxicating languor and fragility, leaving each note seemingly later and later in their interplay until the whole song threatens to fall apart. But it doesn’t. And that deconstructed, skilful musical logic is both fascinating and sumptuous to behold. Frankly, it’s a bit puzzling but holding it all together are Bourne’s travels up and down the whole span of the keyboard, recalling the fluidity and probing of Bill Evans, if little of the formality.

With the venues getting busier and the mood getting more jolly we jump back to Servant Jazz Quarters to catch the “doom tuba duo” of Ore. With just two songs, the bandleaders Stuart Estell and Sam Underwood take listeners from the world of Gregorian chant to a cover version of Low’s Do You Know How to Waltz? It’s a fascinating voyage of delicate sub-frequencies that is both charming and brave. With a tenor horn player and the cello of Oliver Coates adding a bit of bite and texture, the music is powerful. But the addition of some overcooked, blaring bagpipes only serves to push us into the night, smiles affixed, just waiting for our next chance to cross paths with Intersect again.