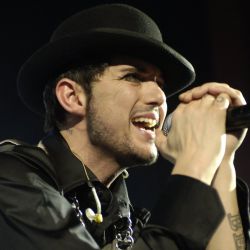 Pursuant to his untimely death in 1997, the band largely steered clear of the public eye.

Perhaps rehashing countless greatest hits compilations was their way of conceding that Hutchence, the heart, soul, and sex of the band, was simply irreplaceable.

Imagine the collective gasp heard around the world when, in the summer of 2005, INXS announced that a new frontman would be recruited via the American competitive reality TV show Rock Star: INXS.

The eventual victor, 33-year-old Canadian JD Fortune, clearly had “old-woman-who-lived-in-her-shoe” sized leather boots to fill. Heading into INXS first British outing in years, I was plagued by questions: When will this reality TV nonsense end? Will my fellow Canuck be able to refuel my waning patriotism? Most importantly, what will the notoriously tough London crowd make of the newbie, on whom a seemingly insurmountable burden of proof had been placed?

As my friend and I began subjecting several overzealous groupies to microscopic scrutiny, AC/DC’s TNT blared from the speakers as the countdown to the iconic band’s “re-debut” began on the projector. Then, the curtain dropped with little forewarning to unveil the new face of INXS. An explosive mixture of pop star charm and rock star scruff, JD Fortune’s raucous rendition of Suicide Blonde rang through the Empire like thunder.

The group’s surviving original members were in high spirits and showed no signs of slowing down. The Farriss brothers’ scorching musicianship was on full display while Garry Beers’ driving bass was executed with reckless perfection. Kirk Pengilly’s sax solos were strategically interspersed between tracks, and the crowd was thoroughly entertained by his playful demeanour.

Fortune’s vocals went from strength to strength as the evening progressed, and his undeniable chemistry with his bandmates evidenced that a brotherhood had indeed been formed. However, as they launched from one vintage INXS hit to another, one began to worry that the band might be several short steps away from being regarded as a nostalgia act.

Fortune’s vocal resemblance to Hutchence on tracks such as Disappear and Mystify did little to dispel this fear. To his credit, Fortune did everything within his power to set himself apart from his predecessor. While the crowd remained impressed with his stellar performance, there was a collective air of resignation which pervaded the arena. It was as if they suddenly came to the realisation that after an evening of hot and heavy reminiscence, the post-orgasmic letdown was bound to follow (and without the cuddling, no less).

Then everything fell into place, and INXS proved that longevity was in its future. After By My Side, Fortune addressed the crowd with a short speech about following one’s dream. Coming from a former Elvis impersonator who, at one time, lived in his car, it was a powerful statement. As he eased into a lush and emotive performance of Afterglow, a ballad from new album Switch, Fortune’s thirst to rejuvenate a band which detractors largely dismissed as redundant became apparent. Performing his own material was all it took for the Canadian sensation to come out of his shell.

Confident that he had won over the crowd, Fortune unleashed his feral personality. His devilish good looks, megawatt star power and endearing bat-shit craziness made for an effective formula. He shared the bottle of wine he had been swigging sporadically with the front row. When offered a rose by a fan, Fortune decided to nourish it with alcohol, a gesture which epitomised his kooky charm. The deliciously decadent Need You Tonight allowed Fortune to turn his omnipresent raw magnetism up a notch. Sexually ambiguous yet ferociously masculine at the same time, Fortune’s innate showmanship was on full display as he slithered from one end of the stage to the other before proceeding to straddle the mic stand, all the while maintaining his vocal virtuosity.

Everyone was on their feet for the hyperactive rendition of What You Need and the smoldering Devil Inside, the track which inspired Fortune to pick up a guitar at age 14. His indefinable star quality was evident as he performed Pretty Vegas, which is incidentally the band’s next single, with effortless flair.

So, how does JD Fortune compare to Michael Hutchence? Is reality TV the appropriate medium to find a new frontman? Are INXS past their prime? Why had I become so fixated with the “Geniuse” shirt which Mr. Fortune was sporting? Some questions are indeed beyond rationalisation. What mattered was that a great time was had by all, and that INXS was lucky enough to have cracked open the right fortune cookie.