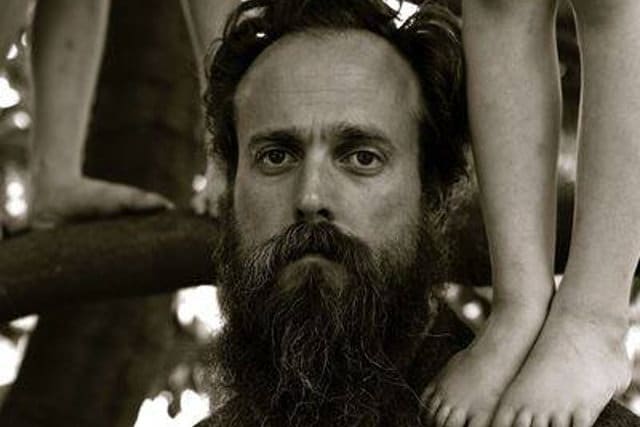 Beast Epic, the latest album by Iron And Wine, signalled a move back to a lighter, more spacious sound that drew comparisons to his first two records. It was definitely a very balanced, consistent album, and one that was rewarded with a Grammy nomination. But in a recent interview Sam Beam preferred to describe it as a “rejuvenation of his message”. Tonight’s show at the Hammersmith Apollo saw this message to be in fine condition.

This show may have been the last in his European tour in support of this album but, in pleasingly contrary fashion, they open with The Trapeze Swinger and Jezebel, two selections from Beam’s deep past. They prove tonight will see him exploring all areas of his back catalogue. Both sound immaculate, benefitting from the four-piece band backing Beam tonight. Last Night follows and brings us back up to date, beautifully reduced to its constituent parts, the band playing sensitively around the song.

Reworking of material is the standout theme to tonight’s show. Cinder And Smoke is slowed down and pulled into different shapes, one of many examples of how he skilfully and confidently re-interprets his own material. Southern Anthem undergoes similar treatment later, totally transforming the song and Jesus The Mexican Boy is also emancipated from its dusty, scratched-out origins.

Debut single Call Your Boys even gets a run-out after a request from the crowd (a rare moment of agreement, all others are amusingly brushed to one side). This touches upon another aspect to tonight’s show – Beam’s funny and engaging stage presence. Surveying the crowd, he remarks how he “loves playing for an incredibly attractive audience” and responds to approving noises from within the venue with “whistles make me strong!”

The band leave the stage briefly to allow him to play his cover of New Order’s Love Vigilantes and God Made The Automobile, both part whispered and carefully enunciated. When they return it is to help on songs like Call It Dreaming and Song In Stone, examples of the finely-honed songwriting that is now standard across his albums. The country stylings of Right To Sky and looser, open-ended feel of Winter Prayers use the presence of upright bass and cello in his current band to good effect, and both see Beam’s lyrics hang exquisitely mid-air.

Pagan Angel And A Borrowed Car and Boy With A Coin represent breakthrough album The Shepherd’s Dog, the latter featuring some nice piano embellishments. Glad Man Singing gently closes the main set before they return for an encore of About A Bruise which is played with the freedom and celebratory feel of a band coming to the end of a month-long tour that has taken them all across Europe.

There may be a rationing of his some of his more obvious crowd-pleasers but there’s still plenty of soul-baring and emotion coming from the stage to ensure everyone goes home happy. It’s the strength of songs and delivery is what has seen him gravitate to venues of this size, the fact that he treats them with non-reverential detachment is a bonus.

He spoke recently about how in his earlier career he wrote songs about ideas of life but now his songs are enriched by experience. This is very much in evidence during tonight’s show, emphasising how his reputation as a performer of note continues to grow.