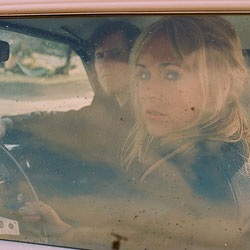 Hearing Isobel Campbell‘s whispering tones is always a treat, but never more than in the gothic surroundings of Union Chapel. Dressed in her trademark pretty dress, she exudes girliness, exaggerating the contrast between her vocals and those of Screaming Trees front man Mark Lanegan – his deep, growling husk making the packed pews vibrate.

The sound they make together is wonderful. The modern day Nancy Sinatra and Lee Hazelwood combo hasn’t tired after two albums and an EP. In fact, their partnership seems to be getting stronger, their melodies edgier and their compositions more intricate. Together, they played songs from first album Ballad Of The Broken Seas and this year’s release, Sunday At Devil Dirt, Isobel occasionally playing her cello, and playing it beautifully.

Songs like Who Built The Road, Back Burner and Salvation radiated around the chapel, accompanied by a lovely warm double bass, sometimes swapped for guitar, a fantastic drummer and an equally talented guitarist. Mark, standing as still as a statue, sang effortlessly while Isobel’s voice was sweet and haunting, although lost when the band played at volume. An array of percussion was pulled out when needed, or moments of magic were created by simple whistling.

With such talent on stage, it seemed such a shame that a slightly dodgy piano sound was used and, in what seems an unbelievable injustice, the most awful keyboard strings – definitely no replacement for the beautiful choral sounds on the albums. When the manufactured sounds just wouldn’t do, recorded strings were brought in. They sounded much better, but seemed to ruin the ambience a little. The Union Chapel is surely the perfect venue for real strings.

And that wasn’t the only disappointment of the evening. Whether through shyness, tiredness or a bit of the Lanegan arrogance rubbing off, Isobel didn’t say a word throughout the gig apart from quickly and quietly introducing the band. To top it off, when she wasn’t singing, she stood with her back to the audience. Strange when she appeared so chatty and funny in previous live performances.

It’s why a big chunk of the four stars given for this gig go to the support band, the wonderful The Miserable Rich, especially for their live violin and cello. The Miserable Rich are part of the Willkommen collective, which also includes The Leisure Society. They definitely made some fans from their show. Folk pop songs like Pisshead, Monkey, The Time That’s Mine, Poodle and the fantastic Merry Go Round were played wonderfully and sung with perfection and tenderness.

Heads were bobbing to the rhythm created by the lone acoustic guitar and the string partnership, joined by double bass, which, although great, could have been a little louder. Although the musicians in their various forms are doing pretty well, you could tell it was still a delight for them to be playing such a special venue. Let’s hope they’ll be headlining one day.