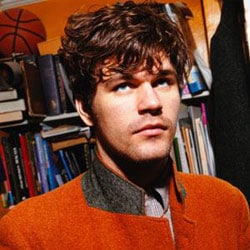 Along with The Horrors and friends The Maccabees, Jack Peñate has come to personify 2009’s trend for the surprisingly great second album. Though 2007’s Matinée crashed into the UK Top 10, for many Peñate was nothing more than a posh geezer with a penchant for indie rockabilly and a habit of dancing as if his legs were made of string.

Few expected great things of follow-up Everything Is New but, as the title suggests, out went the wimpy guitar riffs and in came cacophonous drums, funky basslines and a delicate Calypso influence. Somehow, Peñate and producer Paul Epworth had conspired to make one of the albums of the year.

It’s this atmosphere of celebration that engulfs Peñate as he strides out into Brixton’s newly refurbished Fridge club. It’s not housed a gig in over 15 years and, from the energy Peñate puts in tonight, you get the feeling he’s looking to make up for lost time.

Opener Everything Is New is a joyous rumble, Peñate doing some of his trademark moves as a lone background singer adds support on the uplifting chorus. Ever Glance changes the mood to a more sombre hue, Peñate pleading “take your hands off my shoulder and let me stand” over fluttering guitar and rolling drums.

Whilst the tracks from Everything Is New are fleshed out with keyboard flourishes, horn stabs and extra vocals, the singles from Matinee are simple, no nonsense indie pop. As good as the new songs sound, you can’t shake the feeling that most of the young crowd are saving themselves for the earlier material. Spit At Stars and Torn On The Platform are roared back by a pogoing crowd, their simple, stop-start riffs sung with as much gusto as their choruses. It gives the gig a slightly disjointed feel, as if the two sides of Peñate’s career thus far can’t really be coalesced into something more coherent.

Not that Peñate seems to care. He’s a glorious bundle of energy, either doing that bandy-legged dance of his or leaping head first into the front rows. After the first song he’s dripping with sweat, which given the fact the venue is hotter than the sun is hardly surprising. He takes a breather on the melancholic Body Down, sounding suitably downcast on a song about death, before launching into Second, Minute or Hour to the crowd’s obvious delight.

The highlight of the night is Pull My Heart Away, the soaring opener to the album that changed people’s perceptions. As the songs unfolds, the chorus gets more and more impassioned until the music drops and out steps support act, rapper Theophilus London. Lurking in the shadows, his cap and Ray Ban sunglasses silhouetted against the lights behind him, London delivers the rap from The xx‘s dubstep remix of the original. It’s an exhilarating moment, London urgently rocking back and forth in the shade, before he’s gone and the chorus kicks in again.

By the end, the crowd are a sweaty mess, but as the horn intro to Be The One starts up, it’s business as usual, Peñate singing himself hoarse on the chorus. What the new songs have and what the old songs lacked is a real sense of heart, of a genuine emotional connection. Onstage Peñate delivers these songs with a real sense of purpose, as if he knows he was on the brink and managed to pull it back. He’s done the difficult part, now he just has to maintain it. You get the feeling there will always be a loyal following whatever he does.