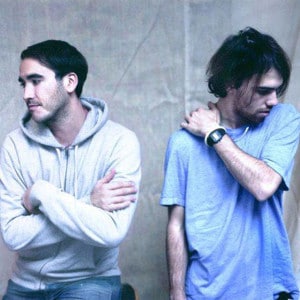 Reaching the last date of their UK Tour, it was clear from the start of Jagwar Ma’s performance at Bristol’s legendary Thekla venue that they were there to celebrate what has, for the Australian duo, been an impressive year. With a universally well-received debut album, Howlin’, and the backing of Noel Gallagher behind them, Jono Ma and vocalist Gabriel Winterfield were in a buoyant mood in front of the sold-out crowd.

Kicking everything off with Howlin’s opening track, What Love, Jagwar Ma proceeded to show why they have been compared to the Madchester Baggy scene of the late 1980s and early ’90s. It was very much like walking into a time warp, with the backwards guitars and trippy synths instigating some highly questionable dancing – the sort of stuff that would likely have even had Happy Mondays’ Bez wincing in embarrassment.

That said, the duo, who were joined by Jack Freeman on bass, were appreciative of the energetic crowd, even indulging in a bit of dodgy dancing themselves. After the beat-driven psychedelic synths of What Love petered out, the band launched straight into Uncertainty, with its throbbing synths and anthemic chorus going down a storm, as the crowd belted back: “How can you, How can you look so gloomy/ When you’re gloomy Howlin’ looks so good to me.”

There was also an early showing for Man I Need, the band’s third and most radio-friendly single, which received an equally enthusiastic response. The song’s whining, acid house synths and rumbling dub beats made it a perfect dancefloor filler, with Winterfield’s growling delivery also at its absolute best. It was seamlessly followed by the grooving Exercise, which is undoubtedly indebted to Primal Scream.

With only one album under their belt, it was hardly surprising that the band filled out their set with a fair bit of improvisation and the old psychedelic jam, rarely pausing in between songs for a break. This worked well during the rave-heavy first section, but as the set continued there was a slight drop in intensity, as the melodies started to merge into one, unidentifiable tune.

However, the lull didn’t last long, with the epic single Come Save Me soon correcting the balance. Its addictive drum loop and melodic synths had the audience completely entranced, as Winterfield’s vocals wondered effortlessly on top. Then there was The Beatles-esque Let Her Go, which was also an obvious highlight, providing something a bit different from Jagwar Ma’s usual synth-heavy material thanks to its simple, but addictive, chorus.

Yet the biggest reaction of the night was saved for the last of Jagwar Ma’s most recognisable tunes, The Throw, with its breakbeats and lurching synths providing the perfect comedown for the end of the main set. “Entice my love, entice my love,” Winterfield repeated, as he jumped around the stage like a hyperactive schoolboy along with Freeman, before the song reached its satisfying conclusion.

The band left the stage to a huge ovation, and were quickly called back on to finish the set in style. They began the encore with the slightly more sedate Did You Have To – a track that would probably be one of the first to be sacrificed when Jagwar Ma have more songs under their belt – before the infectious That Loneliness brought an end to what was an impressive and polished performance.

While Jagwar Ma were somewhat limited by their lack of back catalogue, this was an accomplished show from such a new band and one that suggested that they will be playing much bigger venues sooner rather than later. There will be pressure on the duo to back up the success of their debut album but, for the moment, they appear to be more than happy just playing the material they have to their adoring fans.