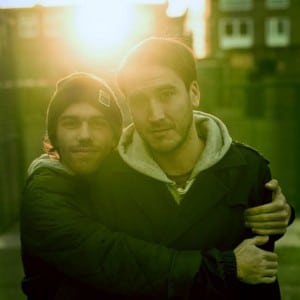 There is no support act and a DJ has provided the soundtrack for an hour and a half. It’s also 25 minutes after Jagwar Ma were meant to appear. People are starting to get a bit restless. There are polite, as well as impolite, calls for the Aussie duo (fleshed out to a trio in the live setting) to hurry the heck up.

Maybe it’s the muggy weather that’s causing the crankiness, but it’s probably down to the fact that Jagwar Ma’s stock has risen considerably in the last few weeks. They’ve been championed by the likes of Huw Stephens and Zane Lowe whilst their debut album, Howlin’, has been getting plenty of stellar praise.

All of this has led to a sell-out show at XOYO and, when they do finally appear, Jono Ma is happy to lurk in the shadows, providing beats, synths and the occasional bit of guitar. The two men at the front of stage look like they’ve been teleported from the early ’90s; Gabriel Winterfield wears sports clothing that wouldn’t go amiss in Ian Brown‘s wardrobe whilst Jack Freeman combines the tall demeanour of Blur‘s Alex James with the bouncy presence of Manic Street Preachers‘ Nicky Wire.

As a trio, they gel together well and the combination of their synthetic components and clean bass lines sees them in good stead for the bigger chunk of their performance. What Love proves to be a mesmerising opener that immediately draws you in, and this is followed by the enthralling pop hooks of Man I Need and the infectiously cheery Come Save Me.

However, this isn’t a perfect evening, as is evident in the show’s middle section. Aside from the aforementioned lateness, their downbeat moments are hardly dazzling – Did You Have To is forgettable – and there are also a few technical problems that stall the momentum. Most importantly, albeit to be expected at this early stage in their career, they don’t quite seize the atmosphere as more experienced bands would.

These gripes are largely forgotten when they go full-on techno, resulting in some of the gig’s more fantastic moments. Four is a mid-set highlight and easily the most ‘now’ sounding piece of music from their debut. The finale is The Throw: psychedelic, ravey, baggy and a whole lot more besides. It gets by far and away the best reception of the evening and, by its conclusion, there is a tidal wave of euphoria that sweeps across all of XOYO as both youngsters and people old enough to remember this sort of thing the first time around are united in their joy.

As much as the whole ‘Madchester revival’ vibe might appeal to a lot of their admirers, Jagwar Ma are more interesting when they ignore the parts of their aesthetic that contain many of that era’s hallmarks. But, of course, that’s talking about their future. In the here and now, Jagwar Ma are not without flaws, but they have the potential to present a relentlessly fun and enjoyable live show if they can learn how to sustain the momentum.