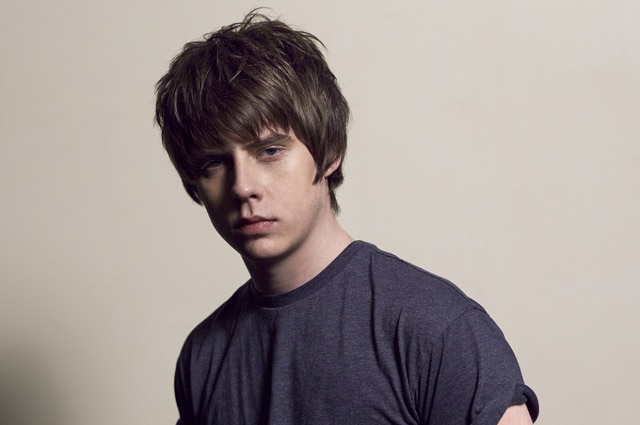 Support band Blossoms – from Stockport, as they kindly remind us – kick off by bringing the North to South London with their warmly received harmonies, featuring new songs from an as-yet unreleased new album plus crowd pleaser Charlemagne. The seven of them waving and filing off emphasise how unassuming the entrance of headliner Jake Bugg is, sauntering casually onstage behind a couple of his band with such little fanfare that you might not know it was him but for his spot behind the microphone.

Underneath his name in a white graffiti tag, not dissimilar to the new decor in Brixton’s McDonalds, Bugg stands alone in the centre of a now-conspicuously empty stage. The band are all banished to dusky corners wearing the regulation black shirts. In a grey t-shirt, this frontman seems too unassuming even for rock ‘n’ roll black. “I’m just a poor boy from Nottingham,” he informs us, opening with On My One, the title track from his forthcoming new album. But his modesty is belied by the audience, who greet the opening note with rapture and sing every word back to him with glee.

Ahead of his second song Bugg swaps from an acoustic to an electric guitar, a faster transition than that made by Bob Dylan, the folk legend with whom he invites comparison, for better or worse. It’s not a fair fight, sparring a 22-year-old Northern scallywag with an ancient, mythic minstrel from the ‘60s; no more so is this apparent than on the opening couplets of Two Fingers: “I drink to remember, I drink to forget…” Pithy working class poetry it may be but will it still be sung with the same unfettered joy in 10, 20, 30 years’ time?

A core of fans are forming a moshpit to songs with an element of skiffle about them, so clearly it doesn’t matter to them. Jake’s voice, which on record can sound nasal and a bit whiny, is much fuller and stronger in person, his singalong lyrics and catchy couplets aided by some quite splendid, full-mouthed enunciation. He saves all of his expression for his lyrics, as between-song banter is limited to the “now we’ll play you a couple of old songs” variety. His body language is limited also, to guitar strumming and a tiny little Bugg shuffle, weight tipped forward onto the balls of the feet and an almost imperceptible bounce allowed up the calves.

This level of restraint looks like a conscious decision, planned in order to let the music do the speaking, but it is self-conscious to the point of contrived – that is until the song There’s A Beast And We All Feed It, during which he sings the words “All I want to do is look in someone’s eyes”, turning slowly, deliberately, and looking out into sections of the crowd with such purpose and emotion that the effect is quite powerful. He might not be one for the chat but his connection with his audience is undeniable.

By the final two songs, Lightning Bolt and new single Gimme Your Love, the whole considerable bowl of the Brixton Electric is a writhing mosh pit, alive with crowd surges and crowd surfers despite the best efforts of the security detail. There’s a pertinent question to be asked on why folk/country with Celtic roots appeals so strongly to young urbanites. But you can’t ask Jake Bugg that question, because with no backchat, no fanfare, no flourish, he’s gone.