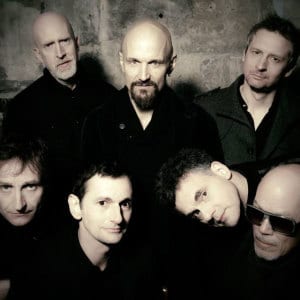 Tim Booth is grinning from ear to ear while rearranging his underwear. He’s just returned to the Royal Albert Hall stage, fresh from his latest bout of crowd surfing with a typically enthusiastic arena full of James fans. This latest excursion is not without its hairy moments – literally – for Booth is wearing a black kilt. Luckily for him he’s not Scottish, so the falsetto does not appear unexpectedly.

It’s one of several high points in a triumphant gig, where James make the most of the spatial opportunities offered by their illustrious venue. The set begins at the back of the hall, the band processing through the stalls and down into the arena, while later on Andy Diagram projects the penetrating trumpet line of Born Of Frustration towards the upper circle, where Booth is holding court.

The set is littered with unexpected turns, the band mining the archive of their 32-year history – and perhaps surprisingly it is the songs at the outermost ends of their output that make the greatest impact. The new songs, while unfashionable to some, are bedding in well as crowd favourites, and the riotous Curse Curse and Gone Baby Gone get people off their seats and, in a couple of hand-picked cases, onto the stage. One woman gets so engrossed she even leaves her handbag behind, clearly mesmerised at Booth’s dancing. He is, at the age of 54, one of the most fluid front men in rock.

From the very start of their career – 1983 to be exact – comes the elastic bass of What’s The World, a Manchester anthem ahead of its time that even The Smiths once covered. Then, on the far side, are some paeans to the departed. This year’s La Petite Mort album marked the passing of Booth’s mother and a dear friend, and its elegiac lead single Walk Like You gathers power and emotional depth. Even more striking the 1999 B-side All Good Boys, where six of the band unite in chant at the end. The powerful refrain – “All good boys, they fought for you, they failed for you”, reminds us of the Royal Albert Hall’s use as a building of Remembrance and tribute.

But while Booth is in the mood for tearful eulogies, he is also here for a party – and at his disposal are the James secret weapons, Diagram’s trumpet and the viola of Saul Davies. Both give the band unexpected and perhaps surprisingly vulnerable dimensions, elevating them far above meat and potatoes rock to music with subtlety and elegance.

Yet it can still move an assembled crowd, and the hollering chorus to Getting Away With It (All Messed Up) stands up beautifully alongside Moving On, which almost moves Booth and his subjects to tears. There is no room or need for crowd favourites Tomorrow, Waltzing Along or She’s A Star, and certainly not Sit Down, which the band do not play live any more. Why should they when they have songs with tremendous staying power like Sometimes? This powerful epic once again waits in the wings as an encore, and Booth beams at his audience before once again going into that funny dance he does. Losing himself in the music of his band for a 33rd year, you would be forgiven for thinking it is his first.

James played: Lose Control, Oh My Heart, Walk Like You, Seven, Curse Curse, Laid, Jam J, I Wanna Go Home, Out to Get You, What’s the World, Vervaceous, All Good Boys, All I’m Saying, Getting Away With It (All Messed Up), Moving On, Gone Baby Gone, Come Home; Encore 1: Born of Frustration, Interrogation, Sometimes; Encore 2: Top of the World