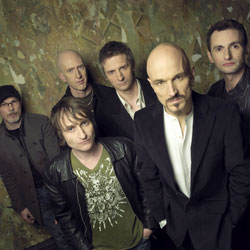 We shouldn’t be surprised that James are back – after all everyone else seems to be reuniting.

What is surprising, however, is how fresh and sharp these middle-aged Mancunians sound.

Evidently their time out has rejuvenated them. You would never guess from the energetic enthusiasm shown in their two-hour set that they’ve been around since the early ’80s.

After a few gigs last year, in which they performed new material, the band is now doing a fully fledged tour to promote Hey Ma, their first studio album for seven years, released to critical acclaim earlier this month. The album does feel like a new start, not just a re-hash of their previous output, proving the band is still dynamic and moving in a different direction. And on stage, this seven-strong ‘definitive line-up’ proudly play all of the new stuff as well as some crowd-pleasing old favourites.

The new songs generally get a good reception – though sometimes with more respect rather than affection, as the audience feels its way into the more muted numbers – while the old ones are immediately greeted with the rapturous recognition of long-lost friends. It is interesting to see how so many of the crowd are under 30, too young to remember the band from their pre-Madchester days.

Having kicked off with a tight performance of one of their best-loved songs Born of Frustration, James move on to the life-affirmative Oh My Heart, one of Hey Ma’s most appealing tracks. A lot of frontman Tim Booth’s new lyrics seem to be autobiographical, notably for the joyous Bubbles, extolling the delights of fatherhood and the wonder of young life, and Upside, a beautifully bittersweet song about working away from your loved ones. Last single Whiteboy refers to Booth’s shaven head – “My mum says I look like Yul Brynner/Too old for Hamlet, too young for Lear” – while next single Waterfall celebrates the refeshing experience of getting close to nature by skinny dipping.

The personal is offset by the political in post-9/11 song Hey Ma, which begins quietly with solo acoustic guitar like an early Bob Dylan folk protest song before taking off – the way Booth jauntily sings the chorus “Hey ma the boy’s in body bags/Coming home in pieces” makes it a savagely ironic indictment of US foreign policy. Balancing this is 72, a stinging attack on Islamic suicide bombers dreaming of the 72 virgins awaiting them in heaven.

Booth’s voice, deeper and mellower than before, is full of controlled passion. In the past his abandoned dancing on stage has actually caused a neck injury requiring an emergency operation, but while his ‘5 Rhythms’ movement meditation sometimes seems more like the demented motions of a stringless puppet than a spiritual exercise, it is thoroughly entertaining. The rest of the band also seem to be enjoying themselves, especially the polka-dot dress-wearing trumpet-player Andy Diagram, who really adds a lot to the final flourishes of many numbers.

Inevitably vintage songs like Come Home, Seven, Laid and She’s A Star provoked the most applause, though those hoping to sing along to Sit Down were disappointed. The band came back for three encores, finishing with Sometimes, with the crowd singing the chorus by themselves for several minutes after all the band stopped playing and came to the front of the stage – they looked genuinely moved by the response. Welcome back, guys.