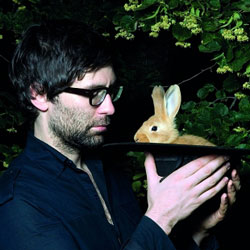 Five albums in and Jamie Lidell is still not a household name – a notion evidenced by the orange girl who asked her bubbly friend on KOKO’s stairs: “Have you heard of Jamie Ladle then?”

With a note-perfect voice and a penchant for the jazzier end of retro soul, some of Lidell’s music should park him on commercial playlists alongside Duffy; yet there’s rather more to him than regurgitation.

Headlining another of the iTunes Festival’s free nights at KOKO, Lidell seems something like an outré choice in a line-up for the month that also includes the über-beige James Blunt and The Feeling.

Even more curious was the choice of support act, Yelle. A lady of contrasts, this latest French pop sensation combines the hairstyle of a librarian with the wardrobe of Sam Sparro. One of these works well with KOKO’s mirrorballs, and it takes mere moments to realise the purpose of the other.

At every chance to dance – and there are plenty during her throbbing set – Yelle throws her hair around; she’s part bodypopper, part headbanger; doesn’t care which; loving every minute. As are the audience, most of whom seem not to have heard of her at the start of her set but by the end they’re pressing forth for more, Yelle’s French lyrics and rather reedy voice in no way hindering her capacity to entertain.

With a live drummer and a Roland-thumping gizmologist backing her, both wearing “DANCE OR DIE” t-shirts, and the obligatory big extra drum that female indie pop stars seem to need these days (cf. Lykke Li, The Ting Tings et al), Yelle bounces around the stage, mesmerising, shimmering, delighting. For some reason she’s supported Mika on tour, but nobody should hold that against her; this is a lady worth catching while you can.

Tonight’s headliner must have felt a sense of deja vu. It’s only three months since Jamie Lidell last played in this big red spangly box of a place, and he’s back touting material from his album Jim, released at that time. In the balconies, a block booking from a media company sees office workers babbling and imbibing at the bars. Downstairs, though, Lidell has attracted some fans who know he can be relied on to serve up a good time.

Running a singular gamut from near-genius sample constructs and improvisational derring-do to music closer in sound to that of Jamiroquai – without an irritating hat, thankfully – Lidell showcases his playful, experimental side with layers of vocals morphed into improbable aural shapes and then sings straight with a voice as smooth as Jay Kay’s – or even Harry Connick, Jr‘s.

In looks he could claim relation to Elvis Costello and employment at a web design company; there’s something decidedly geeky brought out by his glasses and sensible haircut. His more happy-clappy numbers – such as Another Day and Where D’You Go?, both from the new album – suggest he’s ripe for inclusion in a Richard Curtis film soundtrack, even if his tunes don’t always stick in the mind as they should.

It’s that experimental, improvisational side that marks Lidell out as more than a singer. It’s also what makes him difficult to categorise and sell in Tesco. His jazz-funk-soul stylings are so much to sing along to, but when he emerges for the encore with his head encased in a television, complete with spinning aerial, he underlines his capacity for the out of the ordinary. You sense he knows he could go commercial and has instead chosen his own path. Surely even Jay Kay would take his hat off to that.