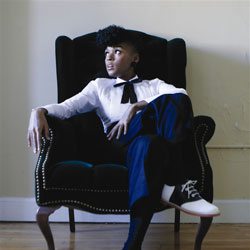 It takes something special to make a crowd in Hoxton’s cramped Bar & Kitchen do anything other than nod sagely and look aloof. Hell, by the end of the show tonight (it’s not a ‘gig’), there were no individuals, just one heaving, sweaty mass of beaming smiles and sore limbs. The reason? 24-year-old, Atlanta-based Janelle Monáe was in town for the night, riding in on a wave of blog and twitter hype not seen since the last chillwave act pressed send on an email only exclusive track.

For those that haven’t heard, Monáe is the future. Her soon-to-be-released debut album, The Archandroid, is a masterpiece of indulgence, clocking in at 18 tracks and taking in alter-egos (she’s Cyndi Mayweather), fictional worlds (Metropolis) and a myriad of musical references (Prince, James Brown, psychedelia, English pastoral folk). Tonight promises to be an ‘event’ and, sure enough, we’re immediately aware we’re not in Kansas anymore when a master of ceremonies arrives on stage wearing a top hat, dramatically warning the crowd against flash photography whilst promoting a special meet and greet available after the show (tickets are a snip at 50).

Having already been held waiting for half an hour in conditions usually reserved for a Swedish sauna, it’s a blessed relief when the members of her band – all bedecked in the uniform of crisp white and black – and three shadowy figures line-up on the tiny stage. Suddenly, out from under one of the black floor-length capes bursts the diminutive Monáe, transforming her tiny frame into an almost elastic blur of arms and legs as she shoe-shuffles from left to right. It starts as the album starts with Dance Or Die, the frantic Faster and the Off The Wall-era Michael Jackson of Locked Inside, all played as if one song, with no need for gaps.

It’s a breathless opening and one that causes Monáe’s industrial strength coiffure to come loose. It’s a moment of imperfection that seems to ruffle her, as if the fact that she’s human after all comes as a surprise. After a short break – if there’s a fault with the performance it’s that there are too many breaks in momentum – she returns to show another part of her repertoire; her voice. Augmented by a lone guitar, she delivers a stunning rendition of the Charlie Chaplin classic Smile, which somehow silences a crowd who two minutes ago were about to turn feral.

The roof just about takes off for the double-whammy of Cold War – that slow organ build-up leading into the explosion of the first verse is surely one of the great ‘moments’ on an album this year – and current single, Tightrope. Anyone who’s seen the video or watched her performance of it on Letterman, will know all about the dance, and sure enough, up on a raised part of the stage she glides and floats around like James Brown with ants in his pants, her feet a blur. As the song draws to a close a dancer comes out with a velvet cape and puts it on the mock-ailing singer, who falls to her knees and pleads with the band: “one more, one more time”.

The night ends with Many Moons from 2008’s Metropolis: The Chase Suite EP, played out in front of a screen showing images from American history. It’s a typically OTT moment and as white balloons are thrown out into the crowd and Monáe hoists her mic stand above her head, you can already imagine how the show would work in gargantuan arenas. In a dingy sweatbox of a venue in East London a superstar was born. Long may she reign.