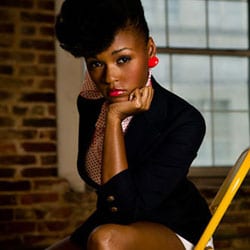 Janelle Monáe‘s irresistible rise – while not exactly an overnight sensation – has undoubtably been one of the success stories of 2010. Her debut album The ArchAndroid, a bewitching concoction of just about every musical genre you can think of, is one of the best albums of the year and there was a real sense of occasion around KOKO, her biggest UK show to date.

Introduced by an impeccably dressed man in top hat and tails, it was clear from the outset that this was no ordinary gig. Monáe’s band entered to the strains of The ArchAndroid’s Suite II Overture until the eye was unaccountably drawn to three be-robed figures, dancing with their backs to the audience and looking for all the world like Ewoks from the Star Wars films. It was only during Dance Or Die that the hood was thrown back to reveal Ms Monáe in her bequiffed glory.

It was a genuinely exciting introduction, with the tiny frame of Monáe looking every inch a pop star as she launched herself into all manner of James Brown-style dance moves. Even the quiff threatened to collapse during Faster, so vigorous was the kinetic energy flowing through her. The occasional reappearance of the backing dancers, sometimes dressed as nuns, sometimes throwing out sweets to the audience (perhaps a nod to KOKO’s bizarre new policy of confiscating confectionery on arrival), only added to the sense of fun.

It wasn’t all as exhilarating – a vocally stunning version of Charlie Chaplin‘s Smile was marred by one too many epic guitar solos from Kellindo Parker, complete with a face that looked like he was on the verge of orgasm. This self-indulgence also stretched to some stadium rock-style extended endings to some of the songs, perhaps an understandable way to extend what was a pretty short set.

Yet when Monáe and her band hit form, the results were absolutely spellbinding. Cold War was completely exhilarating, while one of the great pop songs of the year, Tightrope, was recreated flawlessly (although without the live appearance of the much vaunted “classy brass”) with some incredible dance steps from Janelle as she dashed all over the stage. The setlist didn’t just concentrate on the debut album either, with Many Moons, from 2007’s Metropolis EP, being accompanied by a deluge of black and white balloons.

Although the stage banter was non-existent, there was a stage-dive from Monáe during an encore of Come Alive, the surprise factor of which made it all the more breathtaking. And for anyone disappointed at the lack of audience interaction, Monáe did appear afterwards for the lucky few who stayed behind to sign autographs and pose for photographs.

There’s an aura about Janelle Monáe which screams out ‘star’. Although this show may have disappointed some that were only drawn by the hype, she did more than enough to prove that this would be the last time she’ll be playing to crowds of this size in future. On this career trajectory, stadiums and arenas surely await for this most otherworldly of popstars.