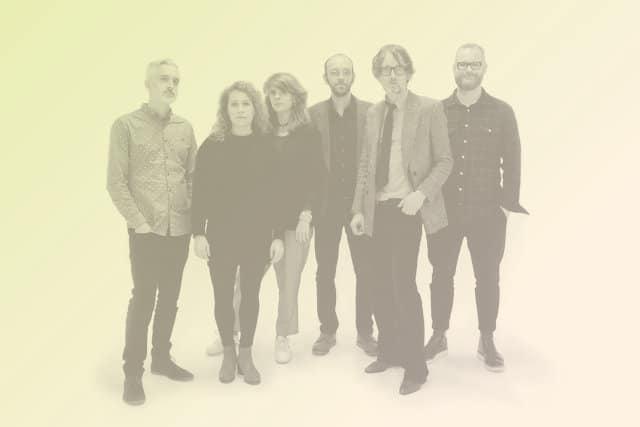 For some two years, a Jarvis Cocker-starring entity known as JARV IS… has been pitching up at caves, offbeat gig venues and the odd festival space, and setting about defining what Jarv… is. In so doing, the six-piece outfit has developed what has become, it was announced this very day, an album’s set of seven songs, called Beyond The Pale. In its live incarnation, the sometime Pulp star, radio personality and veteran of two solo albums is inevitably front and centre, trading amusingly on his inimitable lyrical wit, celebrated stage charisma, iconic finger movements and all-round charm.

Tonight’s show is in off-circuit, club-centric vaults beneath London’s Cannon Street Station. The event was announced through Cocker’s Instagram account, with a phone number on a post-it note – call up and the man himself would tell you how to get tickets. Alongside the album and new tour dates announcements, the gig also serves to highlight second single House Music All Night Long, the distinctly Bond-credits video for which opens festivities, introduced by Cocker’s off-stage deadpanning. The gangly frontman’s silhouette, star-turn kicks and hand gestures visually dominate a track ostensibly about going to a rave sometime back in the late ‘80s, but which is more a consideration of mood and a time than mere reportage.

Much of what follows, in musical arrangement at least, owes less to Pulp’s imperial pop phase than to psych rock, even if Cocker’s endlessly entertaining finger origami, sporadic kick-outs and surprisingly supple wiggling remind us of his heritage as a sometime Glastonbury Pyramid Stage headliner, here up close and personal. New track Sometimes I Am Pharaoh kicks the set off, Cocker preening into a handheld mirror about his assorted neuroses while perched flamingo-like, back to the audience, on his monitor amp. “Sometimes I am Pharaoh, Sometimes I am Chaplin, Sometimes I’m made of stone, But always out there watching,” he whisper-rasps, recalling the narrator of Pulp’s I Spy, ever the documentarian, noting the movements of others to further their own ends.

Cocker’s whimsical between-songs storytelling and audience interaction vie with material beyond the three-minute radio-friendly pop tune duration, taking the set’s running time well over 90 minutes. Yet it doesn’t feel so; as a veteran of 40-odd years of live shows, Cocker’s masterful control of the tone is a lesson on how to keep an audience transfixed. There’s an origins tale of the band’s formation, sweets are thrown into the crowd, some oblique musing on the current coronavirus scare and a consideration of social media’s positives – that Instagram post is how the audience first heard of this event, after all, and here we all are – all factor in. With anecdotes like these Cocker underlines his empathy, expressed in his interest in the little details of humanity and the connections between us all.

The garage rock title track of his second album Further Complications is followed by the lovely, lovelorn and mirrorball-referencing You’re In My Eyes (Disco Song) which triggers, on cue, the mirrorball above us. Much of the rest of the set is new. Elastic electropop epic Children Of The Echo preludes the kraut-tinged psych rock paean to growth, courage and destiny that is six-minute debut single Must I Evolve? Released in time for last year’s summer festival slots, it proves pivotal to both this set and the project as a whole. Cocker says that a book, The Mind In The Cave, informed his thinking and inspired him. “We’re in a big posh cave reconnecting with something deep,” he informs us, every inch the lecturer, as he straps on a curiously-shaped 12-string guitar.

Another new song follows: Save The Whale rhymes with Beyond The Pale to make it the closest the album gets to a title track. It leads into Homewrecker! from Further Complications, announced as a track “you can dance to”. “Follow my arm,” Cocker implores, and over lusty sax and crashing cymbals he points, shimmies and kicks, with his 800-strong dance class copying the movements of their teacher. It’s followed by another new one, Am I Missing Something, and House Music All Night Long, “but live”.

The main set ends, perhaps inevitably, with Running The World, originally a secret track on his 2006 debut solo album, and more recently dusted down as the object of a Christmas Number 1 campaign in the wake of the UK’s 2019 General Election – the result of which was, says Cocker, mouthing like a fish for words of explanation, “an abomination”. Success is not only measured in chart positions: Cocker tells us that sales and streams of the track netted a gross of £12,000, which he ensured was donated to the homeless charity Shelter. The campaign’s instigator is amongst the audience this evening, and warmly applauded for her efforts. The track might feel frayed around the edges over a decade since its release, but there’s no denying the enthusiasm of the audience for hollering out the chorus. “Let’s swear,” Cocker implores.

The encore starts with the jazzy and lyrically rather fruity Swanky Modes, a tale of living and loving in Camden in 1991, unashamedly gazing fondly way back in time to find something of relevance for the present day. The final song is the evening’s only dive into Pulp’s back catalogue, the title track of breakthrough 1994 album His ‘n’ Hers – released as a bonus track on the album’s reissue. Amid guitar that echoes the Rolling Stones’ Satisfaction, Cocker stage-flops – seemingly spontaneously –  twice and puts the mic lead round his neck, before asking the audience what frightens them. A man declares he is arachnophobic, and – after being asked to close his eyes – gets a hand on his head… but all is well, for it is not a spider, it’s a hand! It’s children’s entertainer stuff, but the innocence is what endears. A woman says Brexit scares her most. After appearing momentarily lost for a response Cocker, who campaigned for the UK to remain in the EU, recommends doing good things with good people, stating firmly that this nightmare and these dark days will end, and is she less scared now? She is.

Whether we believe him or not, there’s no denying we want to, and the sense of consoling communal catharsis is – at least for a few moments – very real. As for the track, it’s a curious ending, at once reminding that he could have conjured any of Pulp’s tracks, but has chosen this relative obscurity. With Pulp having commercially peaked a quarter of a century ago and imploded soon after, relative obscurity amid like minds and admirers seems right now to suit Cocker very much. The question is, will he evolve? The answer, delightfully for an artist surely, is: if he fancies to. On past form, you’d think he might.

JARV IS MP3s or CDs

JARV IS on Spotify

More on JARV IS
JARV IS… – Beyond The Pale
JARV IS… @ Steel Yard, London