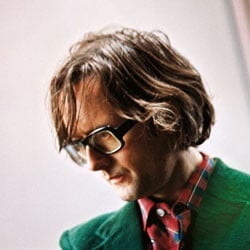 Causes for celebrations yes, but also reflection. Rough Trade’s birthday festivities are no different, extolling the virtues of the label that discovered The Smiths, The Strokes, The Libertines and Arcade Fire, but tinged with a sense of sorrow that the independent record industry faces such an uncertain future.

This was the first night of Rough Trade’s tour of anniversary shows, featuring founder Geoff Travis DJing, New York’s anti-folk singer and comic book artist Jeffrey Lewis supporting and one of Sheffield’s favourite sons Jarvis Cocker returning home. It’s fair to say that most people in the Academy were there for the return of Cocker, but Lewis’ short set also saw his devoted followers pushed to the front of the stage.

Accompanied by just an acoustic guitar, Lewis charmed all and sundry with his erudite, almost stream of conspicuousness lyrics and bashful stage presence (“I’m not sure why I’m here…I guess Adam Green turned them down”). There was also a showing of his “Rough Trade documentary film” (in reality, a comic book with a soundtrack provided by a cassette recorder) describing the entire history of Rough Trade and featuring killer lines such as “their first release was Metal Urbaine/I’ve never really of them”.

Although there was sadly no renditions from his excellent Crass covers album, there was a spirited run-through of Don’t Let The Record Label Take You Out To Lunch before Lewis treated us to a brand new comic book and song, this time about the election of Barack Obama. Charming, touching and witty, it was a fine set only spoilt by three screeching girls screaming “Jeffrey I looooove you” every five minutes.

Jarvis Cocker has proclaimed himself to be “tired” of conventional gigs in interviews recently, and for this performance we were promised something a little bit different. We weren’t disappointed as Jarvis took to the stage looking for all the world like a University lecturer – complete with shirt, tie, jacket, glasses and a full beard, and carrying a pointed stick. The lecturer look was appropriate, for between songs we were treated to the typically entertaining musings of Mr Cocker, complete with slideshow.

The setlist was particularly heavy on new songs, which meant that the atmosphere sometimes felt a bit flat. Yet the good news is that those new songs are some of Cocker’s strongest yet, meaning that his second solo album could really be something special.

Bones, in particular, is a little gem, a tale of meeting a woman at the Natural History Museum, and a slide of John Peel explained the inspiration for another new song – “I went to John’s funeral, and his brother read a eulogy which said that Peel’s advice about sex to him as a youngster was simply ‘girls like it too’. So I pinched that for the title of this song”. The resulting number was classic Jarvis, lascivious and sensual but with a very down to earth quality.

As ever, Cocker was his usual magnetic self on stage, be it raising a spindly finger in the air and performing a perfect scissor kick or explaining the slides which introduced each song – many of them featuring Sheffield landmarks of the past, such as The Fiesta Club or a long dismantled slide in the city’s Endcliffe Park. He even found time to ask us if we liked his beard – “be honest: is it a little bit Peter Sutcliffe?”

Despite the excellence of the new songs, it was the tracks from his debut that raised the most cheers. There was no Pulp material, as to be expected, but Big Julie, Fat Parents and a superb Don’t Let Him Waste Your Time were greeted like old friends. Perhaps the most effective moment of the night though came when Jarvis launched into a passionate defence of the Rough Trade philosophy, comparing it to the ‘business model’ used so often nowadays. “Would you rather see music represented as a flowchart”, he asked before a photo of the interior of the famous Rough Trade shop flashed up, “or like that?”.

That was the cue to introduce probably Cocker’s most passionate and effective song since Pulp’s Common People, the pithily titled Cunts Are Still Running The World. Brilliantly written and still performed with every ounce of passion that Cocker can muster, it was the highlight of the evening.

After an encore of another new song, this time a disco influenced track about “the strange grey blobs you sometimes get in your eyes”, Jarvis disappeared, and then, as if by magic, popped up in the DJ booth to spin Black Legend‘s You See The Trouble With Me. “Are you ready to party Sheffield” intoned a delighted looking Cocker, and the Steel City certainly were. Here’s to another 30 years for one of the most iconic indie labels in the business.