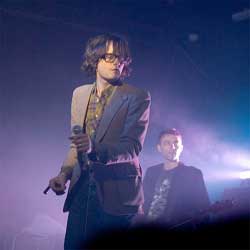 “It’s Chinese New Year tonight innit…it’s the Year Of The Rooster, you know” says the wiry bespectacled man known as an icon to millions in his ’90s heyday. “That’s close enough to the Year Of The Cocker for me…”

Leaving aside the fact that it’s actually the Year Of The Pig, Jarvis Cocker is right in all other respects, especially here, his home city. The eponymous album has more than sated those who still pine for the days of Pulp, and with the musical reputation of the Steel City at an all-time high, he really couldn’t have chosen a better time to return.

With people crammed into every square inch of The Plug for Cocker’s second night in Sheffield, there was a palpable sense of occasion when the lights went down and that unmistakable figure sauntered onto stage and greeted his adoring public with a nonchalant ‘y’alright?”.

Despite so many years of absence from the stage, it’s perfectly clear as the band crash into Fat Children that Cocker’s lost absolutely none of his stage presence – twirling round, doing the odd high-kick, the finger pointing and hip-wiggling are all present and correct. While the material may be darker than Pulp’s most popular songs, tracks like Don’t Let Him Waste Your Time, Heavy Weather and Tonite already sound like classics, especially with the massed choir of The Plug’s audience singing along.

The between-song banter was almost as good as the music. Whether it be testing locals on whether particular phrases are still in use, reminiscing about pubs long closed down, or musing on the fact that the old fire station, recently turned into a bar, should actually have become a pole dancing club (“no vision…”), the gig was in part a stand-up set.

The set list drew mainly on Cocker’s solo album, with the brooding I Will Kill Again taking the tempo down a notch while the stately Tonite had everyone swaying in unison. Black Magic was another highlight, showing off those Cocker moves to perfection, but perhaps the high point of the show was a new song, One Man Show – surely a future single in the making.

Cocker’s backing band, including former Pulp cohort Steve Mackey and guitarist Leo Abrahams, are bang on form, even without the presence of Richard Hawley, but it’s Cocker who’s understandably the main focal point, throwing himself around the place for Black Magic, before departing the stage for a well-earned break.

The encore meanwhile, was something truly special. An superb Running The World was dedicated to Tory leader David Cameron (whose very name produced mass boos – don’t count on that much vaunted Conservative revival just yet) and saw the entire Plug audience agree that “cunts are still running the world”.

Then, to finish off, we were promised an “oldie”. Not a Pulp song, as everyone had thought, but a fantastic version of Heaven by Talking Heads. Finally, an impromptu version of The Human League classic Being Boiled was aired (“fuck, I can’t remember the lyrics…summat about the voice of Buddah I think”), giving us the rare opportunity to see one Sheffield legend celebrating another.

“I think it’s been about 8 years since I played Sheffield last…I’ll try not to leave it another 8”. You’d better not, Jarvis.