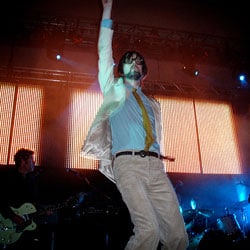 With Britpop very much back on the musical agenda thanks to the return of Blur and the continued pull of Oasis, it’s an oddly disconcerting sight when 45-year-old Jarvis Cocker shuffles slowly centre stage, with what appears to be a walking stick (it’s actually a cane) guiding his way. Dressed in a tweed jacket, cream chords and a yellow tie he certainly looks like an aged rock star. Either that or the coolest geography teacher you never had.

It also helps that he’s chosen a venue that looks like a 1930s bingo hall, complete with garish purple décor and clashing patterned carpets (carpets at a gig!). The crowd roar their approval nonetheless, well aware that nothing could stop their hero from putting on a show, let alone the onset of middle age.

They’re right, of course. For nearly two hours Cocker scissor kicks, gyrates and dances his way through a fiercely energetic set, one that focuses almost solely on the recently released Further Complications album.

He’s always been a playful, almost juvenile performer but tonight he’s possessed, racing from one side of the stage to the other, dispensing gifts, kissing hands and hiding behind speaker stacks. He’s also incredibly funny, warning us of the perils of snogging on ice and questioning the point of cage wrestling, which, inexplicably, is staged at the Troxy from time to time. His humour has of course always masked an undeniable sadness in his songs and the material on Further Complications is a case in point. Leftovers tells the story of lusting after a beautiful girl in a Museum, but there’s the sense that it’s all too late to do anything about it. Slush is the end of a relationship in seven minutes and during the rapturously received Don’t Let Him Waste Your Time, from his solo debut, he points to his absent wedding ring as he sings “you ain’t getting no younger, and you’ve got nothing to show”.

Melancholia suits him, but there are times when the new songs lack a good enough tune to carry the sexual frustrations and witty observations. Caucasian Blues – featuring the “whitest instrument we could find” in the recorder – is a bluesy stomp that goes nowhere fast, whilst Angela is a mediocre riff stretched to its limits. The handful of songs from his debut work better, including the crowd favourites Black Magic and a feverish run through of Fat Children. Tellingly, it’s when Cocker slows things down as on the aforementioned Slush or the brilliant I Never Said I Was Deep that the new album begins to make more sense.

The night ends (after two encores) as the album does, with the disco pastiche of You’re In My Eyes (Discosong). As the cheesy disco sample starts up, a mirror ball is lit, sending hundreds of shards of light around the grand, lovingly kitsch venue that seems tailor made for Cocker’s unique brand of suburban musings. In many ways the song sounds as out of place as it does on record, the muddy guitars replaced with sleek, smooth lines. As the uplifting chorus rears up for one final time, it feels like the last song at a wedding, with Cocker orchestrating one final waltz.

As with Morrissey, Jarvis Cocker is fast becoming a national treasure. With this comes the comfort of always being able to sell tickets or gain column inches, but it can also mean you start to trade more off your reputation then your current musical output. Unlike Morrissey, Cocker steers clear of playing any songs from his previous incarnation, choosing instead to live or die by his new material. And for the most part, for now at least, he succeeds, any slack masked by an unshakeable energy and enough wit and intelligence to distract.