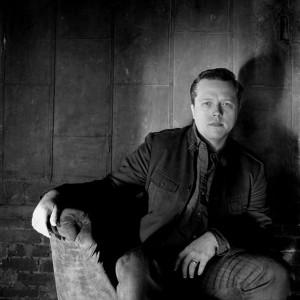 Jason Isbell’s audience at St Pancras Old Church sit neatly in the pews on either side, with the overspill congregating obediently at the back. When he opens with Relatively Easy, a wistful paean to that most luxurious of first world problems – heartbreak – the reception is fittingly reverential.

Three tiny lights glow behind him and one soft uplighter sends shadows across his face, bouncing softly from the gold leaf of Jesus’ halo on the wall above Isbell’s head, but otherwise, the church is in darkness – an atmospheric setting for the songs from solo album Southeastern, released this summer.

For a man who writes picaresque songs telling stories of loss, heartbreak, decline and unfairness, Isbell is surprisingly funny. He plays the first three songs with little fanfare, just him, his guitar and Jesus in the gloaming of the church alcove, but soon he starts wisecracking to the crowd, either wishing a band would rise up from underneath the altar, or actually glad he’s solo as there’s no one else to mess up his back catalogue.

As well as most of Southeastern, he plays Tour Of Duty and Streetlights, released with his band the 400 Unit, and Decoration Day and TVA from his time with the Drive-By Truckers.

In the best country tradition, many of the songs paint entire pictures in three minutes, of main characters, bit players, feuds, regrets and histories that can go back generations, all heartfelt and reflective, most incredibly sad. But Isbell likes to tell stories as well as sing them and the introductions tend to be a little less heartrending: “I used to drink a whole lot of alcohol, in one go, and I decided one time to stop myself from driving drunk – although I was already a little drunk so this was to stop me from driving drunker – by hiding my vehicle. It worked real well. I couldn’t find it and had to walk back to where I was staying. The next day, when I still couldn’t find it, I called the cops and reported it stolen, and they found it in about nine minutes. This song is about that time.”

As he speaks, he gets closer to the microphone so his stories spread out from the speakers at his feet, but as he sings, especially as he soars into a chorus such as on Flying Over Water, he steps back from the microphone and sings upwards into the rafters, his voice swooping around the soft curves of the church.

Over the wistful closing refrain – “did we leave our love behind?” – the church bells start ringing. “Please silence your cell phones” deadpans Isbell.

“If my songs are too sad,” he instructs the pews of people a foot away from him, “just think of something else.” But elegies and uncertainty are the order of the day – it’d be positively downbeat if he didn’t keep making us all laugh so much.

This dichotomy is explained after a gorgeous cover of Whiskeytown’s Jacksonville Skyline. At the end, he repeats his favourite line back to us with joy: “I was born in an abundance of inherited sadness.” Here is a musician having a delightful time, a natural at making people laugh and cry.