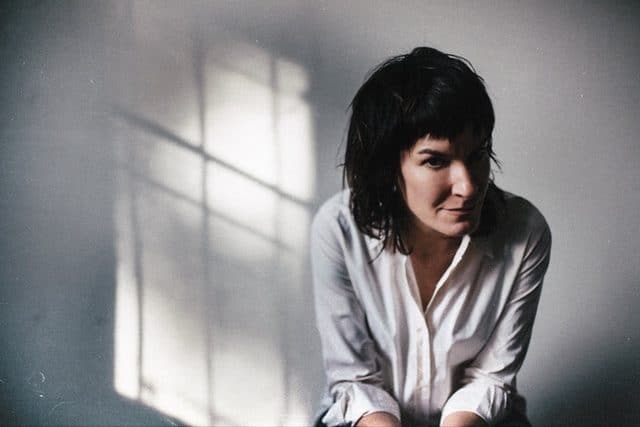 Jen Cloher‘s opening act, fellow Australians Cable Ties, tear a strip off of the Lexington that leaves you thinking, ‘where the hell do you go from there’? Luckily, being the calibre of musician that Cloher is, the post-punks’ superbly high-energy set merely primes the audience for what will turn out to be an equally superb headline performance.

Cloher opens with Hold My Hand, which incidentally closes her excellent 2013 album In Blood Memory. And whilst it might conclude that particular set of songs, here its slow-burning majesty and blistering build is a show-stopping way to start a gig, and its sentiments prove deeply touching.

From the offset, there is a celebratory energy radiating around the room, and quite bloody rightly too. Her latest self-titled record is a searingly honest document that meditates on the difficulties of having a hugely successful touring musician as a partner (Courtney Barnett). Her candour on matters personal and private has offered up one of this year’s finest albums. But this time admiration had mushroomed out beyond her native Australia, where she has been revered for some time. This long-time-coming recognition is unsurprisingly not lost on Cloher who acknowledges the privilege of being a working artist, but also delivers the wry caveat, “It’s only been 12 years and four fuckin’ albums,” with a grin.

Tonight largely belongs to her latest record, and one of the many highlights of this brilliant album, and tonight’s set, is Analysis Paralysis. Its inexplicably cool groove is a supercharged live, as the rhythm section – Bones Sloane on bass and Jen Sholakis on drums – really drive home its delicious grind, and Cloher delivers lines like “While the Hansonites/ Take a plebiscite/ To decide/ If I can have a wife” with barbed relish.

Equally, whilst it is absolutely Cloher’s night it would be faintly ridiculous not to mention that Courtney Barnett is indeed on guitar duties tonight, as she was on the record, and that her playing is mesmerizing. Much like J Mascis, Barnett’s axe work is so characterful and unique to her that it avoids grotesque showboating; instead, it’s always perfectly placed and sympathetic. Overall the band Cloher has assembled around her manage to feel simultaneously totally effortless and bafflingly tight.

Throughout the set, she maintains a perfect balance of roaringly entertaining performance and food for thought. It’s perversely satisfying to sing along to Shoegazers’ line “Most critics are pussies who wanna look cool/ those who can they do/ those who can’t review” when you’re there to, well, review. And let’s be honest, it’s a fair cop. There is little that evades her sharp eye, whether it’s her own relationships, LGBTQ rights, or conservatism. So whilst she and her band truly rock on tracks like the punkish Strong Woman there’s a depth to her music that elevates the live experience from being merely fun, lightweight entertainment.

It feels like a total privilege to see her play in such an intimate space and on a Monday no less. Those lucky enough to be there should cherish it, as on the back of her infectious live prowess and latest stellar long player it’s unlikely such a small venue will suffice for long.