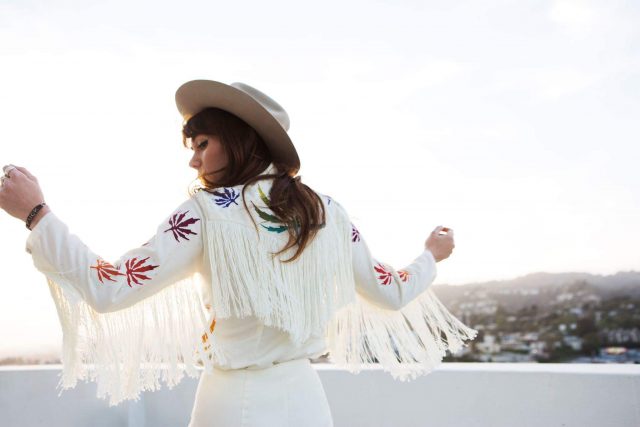 Appearing on TV and film from an early age – from The Golden Girls and Baywatch to thinly-disguised-Nintendo-advert The Wizard – Jenny Lewis knows a lot about playing parts. She’s been Jenny the child star, then Jenny of sporadically brilliant country-hued indie rockers Rilo Kiley, while Jenny the solo artist has already occupied a number of roles.

2006’s Rabbit Fur Coat, a sublime country-soul collaboration with sisters in harmony The Watson Twins, even with the benefit of hindsight, remains one of the best albums of the last couple of decades. If she hasn’t yet bettered it, 2014’s smooth yet contemplative The Voyager certainly came close, while the rawer Acid Tongue (2008) touched on territory she’d explore on the rockier, more astringent pop of 2010’s I’m Having Fun Now, recorded with then boyfriend Johnathan Rice.

Tonight is her first UK appearance in four years, and Lewis is firmly in the guise of returning hero. Even a cursory glance at social media in the run-up to the gig gives an idea of the level of anticipation here. And once Lewis arrives – wearing a sparkling, abbreviated jumpsuit with more fringe than an August in Edinburgh, seated behind a Wurlitzer laden with vases, percussion instruments and two rotary telephones – to the theme from E.T. (a nod to the vagaries of child stardom?), that anticipation is rewarded, and then some.

Backed by a five-piece band, she opens with the slow, intentful Heads Gonna Roll. It’s one of a handful of songs tonight from an as-yet-unannounced new solo album, which Lewis tells us is just finished, and produced – like The Voyager – by Beck and Ryan Adams. Best of these is Party Clown, which we’re told is “a Faustian tale about SXSW”, which has some of the withering contempt of another of Lewis’ previous collaborators, Elvis Costello.

She may be a frequent collaborator but she’s always the best part of any of these, with the triple-threat of luminous presence, that breezy, unaffected voice and forthright, hooky, confessional writing. Drawing from all three of her solo albums – with, thankfully, some of the best of Rabbit Fur Coat (an awesome, almost solitary Happy, say, with a duelling solo between fiddle and keening slide guitar, or the rousing Born Secular and Rise Up With Fists!!) – and a few picks from Rilo Kiley – the highlight a rapturously received Portions For Foxes – it’s a set which shows off Lewis at her best, swapping between keys, a powder-painted acoustic and pacing the stage, mic in hand, and is hard to fault.

There’s such a startling, precise honesty to her lyrics – particularly The Voyager’s She’s Not Me and Late Bloomer, a shaggy-dog narrative of hero-worship and sexual awakening – that there seems to be something to resonate with each of the faithful in the front few rows, and by the time Lewis and her band hit the encore’s rambling, rollicking The Next Messiah, every one of KOKO’s storeys is on its feet.

When her band down tools to sing unamplified backup for a closing Acid Tongue, it’s proof, were proof needed, that this is one child star whose brightest days were way ahead of her, and may continue to be.