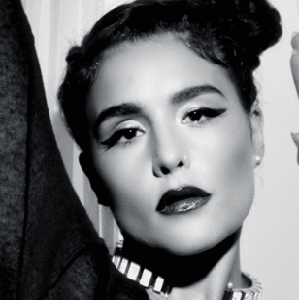 Before the much-heralded homecoming of Jessie Ware, it’s up to Laura Mvula to warm up the crowd, two days after the release of her debut LP, Sing To The Moon. Most of her set leaned towards a sound that was soulful but sometimes a little too pedestrian. Yet once she launches into recent single Green Garden, it comes like a bolt from the blue and injects her support slot with much-needed energy.

By the time the clock strikes 9:30, the lights go down and there is hushed anticipation in a sold-out Shepherd’s Bush Empire followed by whoops aplenty as Ware makes her entrance. A remarkable voice coupled with some truly outstanding songs led her to become the critics’ pop choice of 2012 whilst nominations for the Mercury Prize and a Brit Award have boosted her mainstream popularity. Coming a day after her South Bank Show Award win, she couldn’t be any more confident.

Any sign of nerves, if there were any, are absent. This could be down to the fact that Ware herself comes across as extremely likeable and the kind of person you’d happily spend hours talking to down the pub. Whether it’s teasing the photographers in the photo pit, reminiscing about the time she saw Another Level in the same venue or just cursing the microphone wire repeatedly, she is a delightful presence.

Away from the light-hearted conversations, her performance is impressively assured. Whilst other singers might have been prepared to turn their vocal chords all the way up to 11, Ware always sounds firmly in control and always knows when to go for the big notes; she doesn’t feel the need to excessively belt out the chorus for Sweet Talk or If You’re Never Gonna Move because, quite frankly, she doesn’t have to.

As for the music, she and her three-piece backing band are generally without fault; the tight rhythm section and noodly guitars admittedly strip back some of the electronic sheen that makes Devotion such an irresistible pop album but this is replaced with a tonne of vibrancy. They also do a good job of bolstering the slower-paced ballads such as Taking In Water, which is captivating. The biggest responses from the crowd are for two emotionally-charged juggernauts in Night Light and Wildest Moments – every word shouted back in unison, almost threatening to drown out the star of the show.

There were a couple of pleasant surprise touches. Firstly, her drummer comes from behind his kit midway through and showcases some wonderfully harmonious singing as he duets with Ware on Valentine (originally a collaboration with Sampha). Secondly, the Goldsmiths Vocal Ensemble take to the stage to assist in numbers on No To Love. This kind of thing can go one of two ways in the post-Glee world: either they are unspeakably cringeworthy, or heartwarming. Thankfully, the scales in this case are tipped firmly towards the latter.

It’s a lean and solid set. An hour after arriving – 12 songs worth – Ware departs the stage leaving everyone hungry for more. It’s hard to see how her career trajectory can go anywhere other than up. Undoubtedly, the best is still yet to come (as a new song proves), but this has been a special evening.