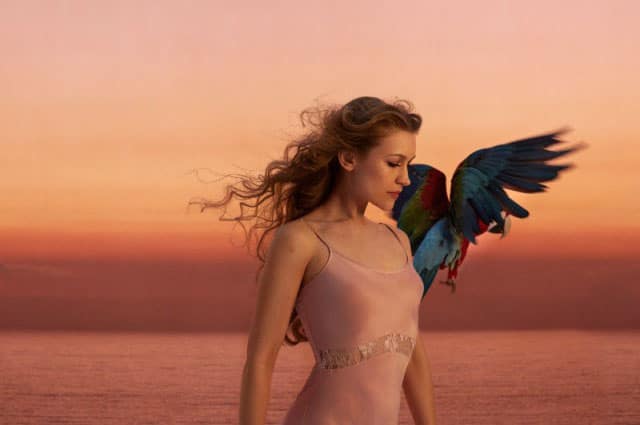 As we approach the end of 2015 it’s fair to say that Divers by Joanna Newsom is currently featuring prominently in the minds of those contemplating and compiling end of year lists. A continuation of her impeccably high musical standards, its labyrinthine structures abound with an individualism we’ve come to expect from her, all emotional depth, rich colours and glittering surfaces. This performance at Hammersmith Apollo brought her short European tour to a close and showed her to be in exquisite form.

Alasdair Roberts provided support, and while large venues aren’t the best place to hear his folk stories, he still excelled tonight. Paradoxically, the frailty and unsteadiness of his voice in particular helping reconfirm him to be a quiet authority on this ground.

Next, Bridges And Balloons opens what proves to be a career-spanning set from Joanna Newsom, who is backed by her excellent band of Ryan Francesconi, Mirabai Peart and her brother Pete on drums. Anecdotes is the first new song played, building elegantly while projecting unabashed longing and demonstrating her musically foraying style. Divers might be the sensuous opus at the core of the album but tonight it appears early in the set and there’s something utterly luscious and captivating in its cut-adrift lamentations. The playful undercurrents that thrive amongst the baroque colouration of Goose Eggs prove similarly striking.

More early highlights (from her older albums) come in the form of the ornate movements of Soft As Chalk and low end drum rumbles and pace shifts of Emily. Later, Have One On Me gets fantastically bound up in itself before eventually enacting a glorious disentangling while a wonderfully searching and adventurous version of Cosmia appears later on.

Yet, it’s the new songs that stand out. Sapokanikan fancifully sways and swings, something almost bluesy in its delightfully irregular footsteps. Leaving The City meanwhile skips along seemingly in thrall to the surrounding musical intensification and the tenderness within the multi-hued tapestry of Waltz Of The 101st Lightborne gets beautifully uncovered in the live setting. Time, As A Symptom and A Pin-Light Bent have a stark finesse and lucidity to them and, along with the other new material, show how she weaves magical storylines that abstrusely refuse to reveal themselves too easily.

There’s still a Van Dyke Parks-like flow to some of the lyrics but as wondrous and spellbinding that her voice is the arrangements are arguably now just as significant – there’s something impressive and appealingly confounding in how they can be both musically verbose and skeletal. Yet, especially in a live context, her voice continues to beguile – the angular contortions, malleable shaping, graceful smoothness.

Earlier in the night she may have confessed to forgetting some old songs when rehearsing for this tour but the dazzling encore of Baby Birch and Peach, Plum, Pear show there’s no evidence of that tonight. Outside her fervent circle of fans she may still divide opinion but inside it’s one-way adoration as proved by the swift and unanimous standing ovation she receives at the end.