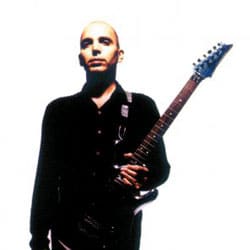 When it comes to guitar heroes, few are more worthy of the title than multiple Grammy award-winning musical virtuoso Joe Satriani. Tonight’s crowd at the Hammersmith Apollo are every bit aware of it.

The 54-year-old former music instructor’s students to date include Metallica‘s Kirk Hammett, David Bryson of Counting Crows and fellow guitar hero Steve Vai, and he’s welcomed to the stage with a standing ovation that gives a nod to his influence. The Jimi Hendrix inspired star has been seconded to perform as lead guitarist for the likes of Mick Jagger and Deep Purple, to name but two. In fact there aren’t many guitar players or rock greats with whom he is not intrinsically linked.

Tonight’s gathering at the Hammersmith Apollo offers testimony to the dedicated following Satriani has garnered over the last three decades as a solo artist and in his various musical line-ups.

Tonight is the fourth show in the European leg of his world tour and serves as a live dusting-down of his 14th solo album Black Swans And Wormhole Wizards, released earlier this month. Fans may have had just weeks in which to digest his latest material, but greet the first newbie of the night Light Years Away with the same recognition as a trusted classic.

Sporting his signature shades Satriani wields his Ibanez JS series to the music as a sea of heads nod in time to the beat controlled by Jeff Campitelli. Accompanied by Mike Keneally on keyboard and Allen Whitman of The Mermen on bass, Satriani powers through a 90-minute set in which he showcases the majority of his new album, interjecting welcome favourites such as Satch Boogie from second album Surfing With The Alien, and War from the The Extremist.

On introducing Dream Song from the new album Satriani tells the crowd: “It’s kinda weird, but this song actually came to me while I was asleep. I dreamt me and the band were playing it and so I went downstairs and started writing it. Naturally I called it Dream Song.” It’s a relaxing and melodic track which, accompanied by a light show, remains true to its name in its transcending nature.

It’s followed by Littleworth Lane, also from the new album, which he explains is named after the street in Sea Cliff New York where his mother lived. A beautifully crafted pure blues addition to the set and arguably one of the most diverse tracks on his new album, it demonstrates Satriani’s ability to break from the legato technique and full-on testosterone fuelled numbers which we have come to expect.

Satriani closes a tight and exhilarating set which marries his old material with the new and reinforces his title as one of the most technically advanced rock guitarists of our time.