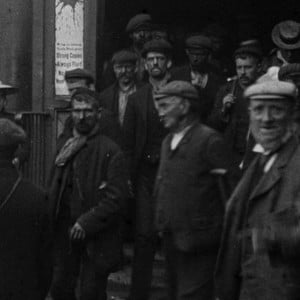 Since his seminal 2002 debut album Englabörn, Icelandic composer Jóhann Jóhannsson has established himself as one of the leading names in modern classical music.

He’s also shown an interest in more ambitious, broader-ranging musical projects. His fourth studio album, IBM 1401 – A User’s Manual, was a meditation on obsolescent technology (based on recordings his father made on a discontinued IBM computer) while 2008’s Fordlândia imagined a soundtrack to the true story of American businessman Henry Ford’s attempt to create a utopian society based around the creation of a rubber plantation deep in the Amazon in the 1920s.

Alongside his traditional soundtrack work he’s also composed music specifically for brass ensembles, so his involvement in writing the score to The Miners’ Hymns, a film by Bill Morrison on the history of coal mining in the north east of England, felt like an appropriate fit.

The tour of the live soundtrack to the screening of the film reached the Barbican, with Gudni Franzson conducting an ensemble featuring Jóhannsson on electronics, the Iskra String Quartet and members of the Durham-based NASUWT Riverside Band. The involvement of the latter alongside the presence of strong north eastern accents in the audience re-asserted a regional dimension to the occasion. A meticulousness and sense of interlinked completeness also surrounds the piece, evident in the detailed early research from all involved in the project to the composition of the score, collation of archive footage and tonight’s live performance.

Jóhannsson’s soundtrack is immediately mournful, solemn and respectful, opening movement They Being Dead Yet Speaketh sounding imperious yet restrained. The film moves from colour aerial footage of the contemporary geographical landscape to lingering, monochrome shots of the nameless, granite faces of the miners and their families. The dark, resounding clash of An Injury To One Is The Concern Of All arrives just as the film turns its focus to the detail and danger of the mining process. The heralding, impactful brass of Freedom From Want And Fear continues the strong opening.

Morrison’s film strikes a well-judged balance between romanticisation and reality throughout, the cast of silent, identity-less characters projecting a stoicism and dignity matched by the score. It may be specifically about now-departed mining communities but in a wider context the film works well as a condensed anthropological study of the bittersweet passing of time, social/economic change and class politics. It also invites further questions that can’t now be answered. Who were these men? Who did they return home to? What lives did they lead?

Jóhannsson recently commented how the film should be seen as a celebration as well as a requiem for the mining communities, something very much evident in the gradual, majestic rise of final movement The Cause Of Labour Is The Hope Of The World (the choice of socialist slogans as names for each movement is apt given that tonight’s performance falls on the 30th anniversary of the start of the 1984-5 UK miners’ strike).

Musically the finale also sees Jóhannsson return to his compositional strength. For all the beauty and power of the early stages of the score, they also were in possession of a coldness and tautness. The final movement however is full of warmth and emotion, sounding triumphant and glorious as the visual narrative draws to a close. It’s a reminder of how powerful and thought-provoking music and film can be when they combine so successfully.