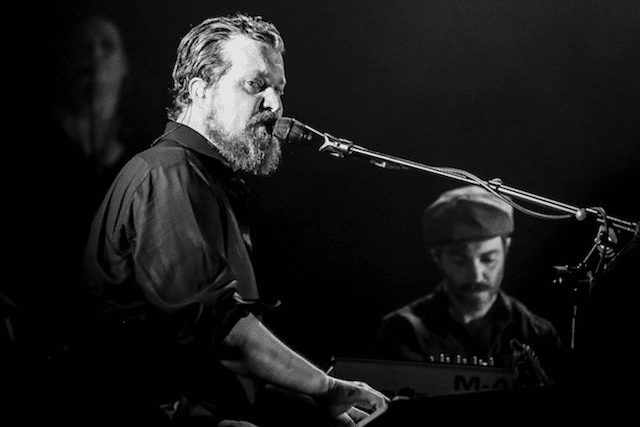 Brighton has always had a soft spot for John Grant. Not only has local label Bella Union put out his five albums but last time he played here, he was at the Dome, a large venue that famously staged the Eurovision Song Concert in 1974 when ABBA won. Indeed with his old band The Czars, he was known to do a heartbreaking version of Angel Eyes. Whilst we don’t get that this evening, we do get an intimate smattering of songs from the last 10 years of solo recordings, and one wonderful number from his pre-fame group.

The Attenborough Centre is an intimate auditorium located on an out of town university campus and has a suitably academic vibe. Seating is rigid and the chairs not designed for comfort but we take our spaces and Grant says he wants the lights up so he can see all the beautiful faces. As much as it’s nice to be complimented, his flattery is unnecessary as we are all instantly smitten.

It’s physically impossible not to love John Grant. The man is a teddy bear or, more accurately, an emotional support wolf in lusciously bearded human form. You can’t help but want to pick him up and cuddle him to the core because he exudes kindness, empathy and gratitude. When he takes to the stage tonight, to almost rapturous applause, he pulls his hands to his heart and mouths an inaudible thank you to all present before sitting down to his Steinway. He’s joined by long time musical companion, the wonderfully moustachioed Chris Pemberton, who tonight is playing some kind of retro space inflected keyboard and providing backing vocals.

The stage is decorated sparingly, just the two pianos and some rectangular lights led lengthways along the stage floor. Introducing the first number as Geraldine, he admits he’s worried he’s going to forget the lyrics, so changes his mind and launches into the titular track from his 2015 album Grey Tickles, Black Pressure instead. It’s a charming ditty about familial dismemberment and naivety in the face of sexually transmitted diseases. Filled with hard to spell words like hemorrhoid and parapraxis, it seems perfectly chosen for this academic venue. Having remembered the lyrics midway through that number he jumps into Geraldine. Its heroine is the late actress Geraldine Paige who worked closely with Tennessee Williams. Like the great playwright, Grant has a cheeky way with words and has dealt with his sexuality through his work extensively, perhaps a bit more honestly in these supposedly liberal post-homophobia days.

He continues to play for the next hour and three quarters, both with Pemberton and alone. Between most numbers he thanks everyone involved with his shows and explains some significance to some of the more personal songs. There are tales of sullen exes stalking him at shows, comfy lunches with record label bosses and the like. There’s a faux innocence that comes through with his repartee, such as on Marz where he lists ice cream flavours from a favourite childhood ice cream shop, or on Glacier with its Björk-like lyrics talking of “spectacular landscapes nourishing the ground with precious minerals and other stuff”. What could seem like a shoddy end to a sentence is actually a clever appropriation of regular speech. Grant has the knack of populating his songs with naturalistic pop culture references and real life emotions that elevate his songwriting abilities above the usual singer songwriter tropes that many others fall into. There’s a lot of brain on show and even more heart revealed doing these numbers.

When they leave the stage after 14 songs, we all stomp our feet and demand they return, and they kindly acquiesce. We get a fiercely emotional version of Where Dreams Go To Die, the darkly amusing fan favourite Sigourney Weaver and of course, a stirring finale of GMF. If you’re not sure what that acronym stands for, then you need to go listen to Pale Green Ghosts forthwith. As the duo do finally leave the concert hall, we are all smiling 165% more.