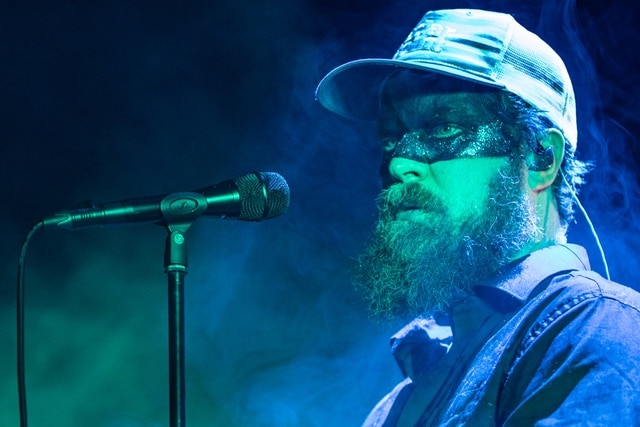 With four post-The Czars albums under his belt, it’s already possible to trace the distinct eras of John Grant. What would often take an entire career, we’ve witnessed in just eight years, since his debut ‘solo’ record Queen Of Denmark, back in 2010.

From the emotional but measured introduction to his solo work, we flit to the tormented, twisted expose of a soul in flux, and now, with his latest release Love Is Magic, we get a glimpse of a more playful, at times menacing and vengeful Grant. Bringing these characters together risks a segmented, clunky show. But somehow he pulls it off, with a performance equal parts fun and deeply moving.

Tonight he has a full band (which includes Siouxsie & The Banshees drummer Budgie), who do an incredible job of translating this varied repertoire for the live stage. Despite playing to the vacuous Brixton Academy, this show feels small and intimate. The ballads are raw, his voice soaring over heavy keys, in contrast to the house party feel of the thumping dance tracks. The new record, which is full of electro fuzz that can at times feel one dimensional – devoid of the overswell of feeling that we’re used to – becomes bolder, more intense. Electric drums boom instead of thud, each sound carefully unpacked.

Pale Green Ghosts – the title track of his second album – is already a treasure, but given this treatment, with Grant’s vocals to the front, each electro-clash amplified and penetrating, lasers streaming through the air and a dizzying backdrop, it’s nothing short of stunning.

Grant has called his latest release “an amalgamation of who I am”, celebrating “the absurdity and beauty of life”, and its songs stand out as being on the whackier side. Preppy Boy is funny, observational, lusty and bold: “I see you out there playing lacrosse, I know you wanna be the boss, and as far as I’m concerned you can, but you know, she’ll never understand,” while He’s Got His Mother’s Hips dips its toe into the surrealism he flirts with throughout Love Is Magic: “I think Colonel Mustard did it in the billiard room, yeah, yeah, they say his salsa workshops, are a harbinger of doom.” 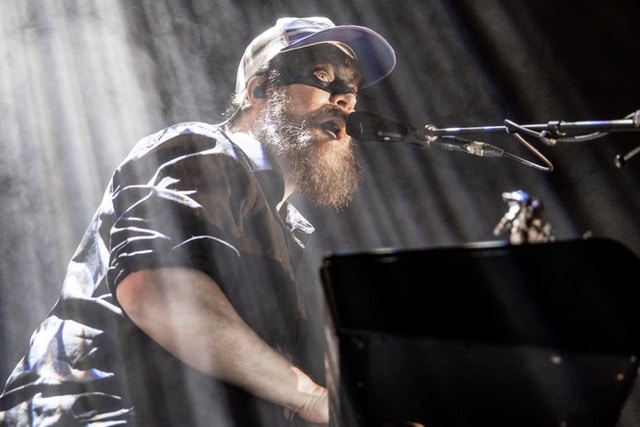 None of this is preparation enough for Diet Gum though. A bombastic rant about an ex, it sees Grant at his funniest and most disturbing. He struts across the front of the stage, rattling out a list of ridiculous insults in a hyper-American accent: “Do you even know what a collective noun is, stupid-zilla?” It’s silly, but you know that it’s probably not come from the funniest of places.

On the opposite end of his spectrum, Glacier sees him flanked by dramatic red and orange lights, like flames licking at him while that killer piano swamps the room. Later on, an extended encore includes GMF, which sees him stalk the stage before standing on its edge, holding the mic aloft as the crowd sings along to its bolshy refrain: “I am the greatest motherfucker that you’re ever gonna meet.”

Grant has always been deeply personal, his life played out on stage (it was during a show that he first announced he’s HIV+), whether it’s mourning long dead relationships, reflecting on tough times, the state of the world or politics – he never holds back. He experiences things with a raw, unreserved passion of extremes. He feels like the real deal, and you’re sucked into the moment with him.

Tonight John Grant has achieved something that shouldn’t work – that distinctive baritone vocal should belong to a balladeer or the singer in an electro band. But he’s mastered both. It’s one of the things that makes him so intriguing; he’s up there with the very best live performers of the moment.