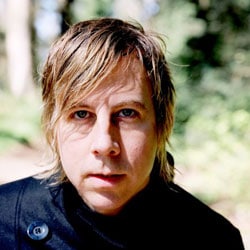 White Wilderness the latest album by John Vanderslice saw him collaborate with the Magik Magik Orchestra, a California based ensemble of classical musicians that resulted in a lighter, more refined sound, signalling a move away from the guitar-heavy nature of much of his previous work. Pleasingly, the album also reconfirms his ability to write songs rich in descriptive and narrative detailing to be as strong as ever. Yet, an inescapable fact is that most of the songs are built around alternately subtle and extroverted brass/string arrangements, making the prospect of a live solo show to promote the album an interesting proposition. How would the greater tenderness inherent within many of these songs be translated live? Could the strings and brass arrangements be replicated on acoustic guitar alone?

In the end, this show at the Lexington would not really help answer those questions as Vanderslice opted to play an enjoyably confounding set that drew heavily on his back catalogue. Another unexpected development saw Vanderslice take to the stage with his drummer Jason Slota (who would also play keyboards), despite the gig being billed as a Vanderslice solo show.

First up however was Loney Dear (Swedish musician Emil Svanängen) playing songs from his forthcoming album Hall Music. Upon arriving on stage he removes his shoes, a necessity for him to operate the multitude of pedals on the floor in front of him. He then uses these to loop his (often wordless) vocals and guitar to create densely layered, intimate songs. The technology frees him up to play drums and before long these grow into extended, enveloping pieces. A quick look around the venue reveals a sea of heads nodding in approval.

John Vanderslice begins his set on a suitably contrary note with Lucifer Rising, a song from his 2009 collaboration with The Mountain Goats’ John Darnielle. Overcoat is the only track performed from White Wilderness, sounding palpably harder than on record, barbed guitars replacing the airy strings. The rest of the set includes five songs from 2007’s Emerald City (the pick being Tablespoon Of Codeine, angular guitar riffs replacing the scratchy keyboards of the album version) and three songs from 2005’s Pixel Revolt, arguably his strongest album. Tonight’s version of Plymouth Rock saw Vanderslice bolster the sound once again, all serrated guitars and clashing percussion. It also serves as a reminder of Vanderslice’s ability to write compact, illustrative songs that cover subjects rarely tackled elsewhere, in this case detailing the case of an American soldier in an occupied foreign land who begins to question what he is doing (“I lost the reason I’m here”).

He plays Too Much Time and Sunken Union Boat, two tracks from his 2009 Romanian Names album that furthermore show the variety within his music, the considered reflection of the former being followed by the upbeat guitar-pop of the latter. He also squeezes in three of his older songs – Time Travel Is Lonely, Trance Manual and Up Above The Sea, this last song being built around a distorted keyboard groove (skilfully executed by Slota whilst drumming).

For the encore Vanderslice takes to the venue floor and encourages the crowd to gather around him so he can play “campfire style”. He plays Angela, a song that is equal parts beauty and humour. Ostensibly the story of a man who inadvertently allows his partner’s pet rabbit to escape through their apartment window, the song then develops into a dissection of a human relationship in decline. In the cold words of a gig review it may sound twee but it proves to be a rather moving track. He closes with White Dove and Time To Go, both augmented by enthusiastic backing vocals from the crowd. There may have only been around 100 people at the Lexington but tonight they were treated to an excellent show by one of alternative rock’s hidden treasures.