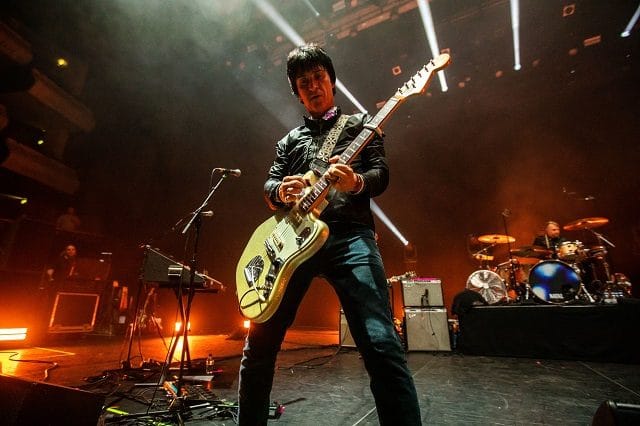 It would be easy for Johnny Marr to sit back and rest on his reputation as one of the best guitarists of his generation but over the years he’s proved himself a passionate advocate for new music and creative collaboration. Tonight’s setlist is roughly divided into three categories – tracks from last year’s The Comet Is Coming album, songs by The Smiths and songs by Electronic, all mixed into one whole. He is backed by a young band and it’s clear from the beginning that he sees his role is to entertain and provide the enthusiastic crowd with a performance that matches their expectations.

He bounds on stage, a dynamo of enthusiasm and energy, saluting all areas of the sold out Royal Festival Hall. The early stages see a fair bit of rock star guitar posturing, a little bit of mock Mancunian audience confrontation and a series of short, sharp lines intended to keep the atmosphere lively. “Let’s have some fun” he announces early on and, to be fair, that’s exactly what the majority of the crowd do over the next ninety minutes.

His abilities as a guitarist are beyond question – he’s clearly still a fantastically skilled musician and his experience enables him to deliver well-crafted songs (evidenced by the early appearance of the likes of The Tracers and Armatopia in the set). Yet, there are also sections of the show that don’t register as strongly as you might expect and his dives back into his past are met with inconsistent results.

The subject of to what extent you can enjoy an artist’s music despite their political views or behaviour has came up again recently, partly in connection to Marr’s former songwriting partner Morrissey’s recent controversial right-wing statements. Hearing Marr play songs by The Smiths therefore should be an enjoyable opportunity to appreciate those songs again without having to worry about the broader issues at stake but it doesn’t always work out that way. First up is Bigmouth Strikes Again which starts off well with its galloping guitar riff but vocally he struggles to impose himself, reverting to sounding like his former partner. A romp through You Just Haven’t Earned It Yet Baby is even less convincing.

However, some tracks fare better. His son Nile (named after this year’s Meltdown festival curator Nile Rodgers) joins him on stage for an engaging Please Please Please Let Me Get What I Want This Time and This Charming Man is the most jubilant moment of the set. As you’d expect Marr executes the iconic riff expertly and even his Morrissey-esque vocal sounds better here. The wavering wall-of-sound guitars on How Soon Is Now? see him excel in his natural domain, but the encore of Last Night I Dreamt That Somebody Loved Me and There Is A Light That Never Goes Out both seem to lack a certain something (although the crowd roar their approval).

Getting Away With It and Get The Message by Electronic were two of the best singles of the early ’90s but both sound a little leaden tonight. The former badly misses the keyboards of the original while the latter lacks the iridescence of the record. A cover of A Certain Ratio’s Shack Up injects a bit of liveliness mid-set. His solo material is similarly uneven. The post-punk sounding New Dominions has a genuine point of the difference with its darker motorik groove and on Day In Day Out his guitar work stands out, sounding particularly ablaze. However, Walk Into The Sea is less inspired and Easy Money fails to make an impact.

In some ways the show isn’t exactly a revelatory experience, confirming some previously held thoughts. Johnny Marr is still a guitar icon, a proficient if imperfect vocalist, an adept songwriter and a popular man of the people. Yet, as a show, tonight didn’t fully hit the mark.