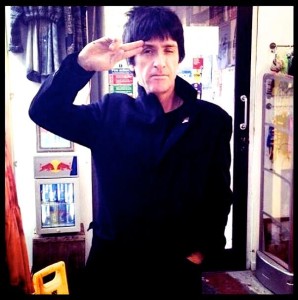 Despite being given the kiss of creative death memorials of Q Hero Award and NME Godlike Genius, the recent release of his excellent first official solo album The Messenger shows Johnny Marr to be in rude musical health as he approaches 50 years of age. Twenty-six years on from The Smiths, he is rightly revered for his immaculately crafted songwriting and chiming guitar style which inspired subsequent generations of indie musicians, but he has always wanted to discreetly get on with the job of making music, leaving the limelight-seeking to erstwhile collaborator Morrissey.

Marr has always been a team player, a band man, which explains why post-Smiths he fitted in hand in glove with The The, Modest Mouse and The Cribs, as well as guesting on the albums of numerous other artists. It also explains why this reluctant front man, who has taken time to develop into a lyricist and singer, has only now gone it alone (though the underrated Boomslang he made fronting Johnny And The Healers 10 years ago is a solo album in all but name).

There is real anticipation in the capacity crowd before Marr and his backing band arrive on stage, bang on time and typical of this no-nonsense, consummate professional. Like the way he plays guitar, his appearance is stylish in an understated way rather than flashy – a trim mop-top figure wearing a short grey-checked jacket, purple button-down shirt and black drainpipe jeans, brandishing his famous Fender Jaguar, he has aged well since hitting the scene in the ’80s.

Marr does not have the charismatic stage presence of arch provocateur Morrissey or his inimitable vocal phrasing, but his voice is pleasantly melodic if lightweight and on the bland side – it shows nothing of the distinctiveness of his guitar playing, which has never sounded better. His band give tight support, with The Messenger’s co-producer and one-time Healer James Doviak on rhythm guitar and occasionally keyboards and Haven rhythm section Iwan Gronow on bass and Jack Mitchell on drums.

As expected, the good-value 90-minute set showcases the new work (with strangely just one track, The Crack Up, omitted), but also includes five songs by The Smiths and a couple by the supergroup Electronic he formed with Bernard Sumner in the ’90s. They kick off with a stirring account of The Messenger’s opening track, the upbeat, Motown-inflected The Right Thing Right, catchy single Upstarts makes an instant impact and the beautiful title track shimmers mysteriously.

Although the new songs get a positive response it is inevitably those by The Smiths that really get the crowd going, especially a lively performance of Bigmouth Strikes Again which turns into a sing-along. The band return for encores with a guitar-riffing Getting Away With It sounding very different from the original synth-led Electronic version. The evening closes with the reverberating classic How Soon Is Now and the melancholic romanticism of There Is A Light That Never Goes Out. It’s great to see that Marr’s creative light is still burning brightly.