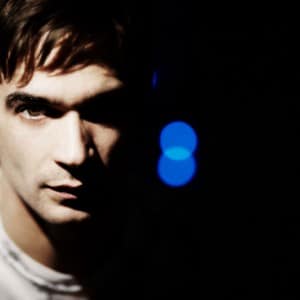 Jon Hopkins‘ fourth solo album Immunity is a sublime, intoxicating monster. Inspired by the arc of an epic night out, though wrapping together far more than a build up/come down narrative, its first four tracks – including the grinding, belting techno of lead single Open Eye Signal – pull inexorably through Breathe This Air towards the compulsive Collider, a stentorian if unsteady strut of euphoria that poundingly straddles the album’s middle moments and overlords speakers like an invincible invasion force.

The second half of the album, with shaded vocals courtesy of co-Mercury nominee King Creosote, brings things gradually away from the dance floor and into Brian Eno-esque ambient/soundtrack territory as the night winds down.

Hopkins created the album with an AV show in mind, and tonight we get to see as well as hear his vision. With support from fellow moodbender The Field and Nathan Fake on decks, despite stiff competition in London tonight from Chromatics and Gold Panda, it’s no wonder the show sold out well in advance; various bands, artists and label bosses are amongst the fans present.

Twiddling various dials and crunk-inducing faders laid out on a table, Hopkins, clad in a dark t-shirt and lit sparingly in front of the projector screen’s flashes of light patterns, demonstrates his love of the dance floor almost immediately. Without pause for applause or explanation between tracks, he ratchets up the mood time and again, holding the audience in a hypnotised place where they know the drop is coming… eventually… and keeping them up there for a little longer than they’d expect, shuffling beats every which way as he does. He toys with them, as a cat might with a mouse, and each time the drop comes there’s an audible exhalation of delight from the assembled devotees. From the very beginning he has the room with him, building layer upon layer of repetition to a euphoric crecendo, and it stays with him till the end.

Open Eye Signal and Collider are wheeled out early on, a justified vote of self-confidence in the rest of his set. While they’d have been better still louder, they prove to be as perfect in a live setting as on the album. Hopkins clearly enjoys himself playing them, moving to the beats behind his table as the projections cartwheel and whoosh behind him. The blissful moments of Immunity’s end are not in such obvious evidence; this is a set geared to making bodies move.

It’s also a set bereft of vocals, or of a focal point beyond Hopkins’ silhouetted form. Instead, the music and the visuals combine to transport the audience out of the watching-a-gig dynamic, letting the hypnotic grooves in and keeping them going, the audience like so many spinning tops amidst it all. It’s abstract, captivating, intricate and compulsive stuff; with the focus so squarely on the music, Hopkins is deliberately anonymous, a half-seen figure directing events.

He returns for a brief encore, and then the house lights come on. The feeling of having just stepped off a fairground ride is hard to shake as we head out into the night.