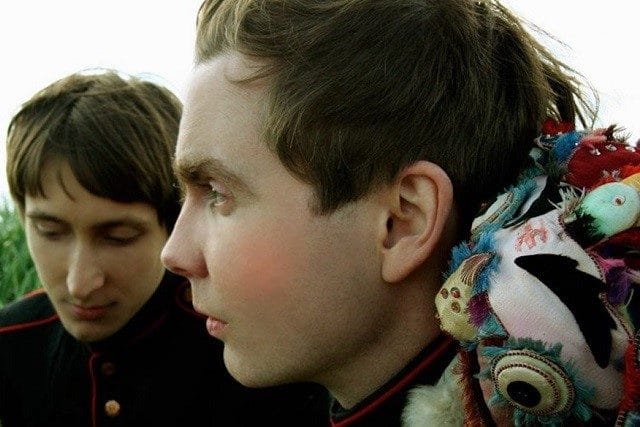 2009 was a time of change for Sigur Rós and frontman Jónsi. The band had just released their fifth album Með suð í eyrum við spilum endalaust the year before and Jónsi had started to talk about his debut solo album Go that would appear in 2010. In between however, he joined forces with his partner Alex Somers to release Riceboy Sleeps, part album part ambient interlude, whose influence would increasingly shape Jónsi’s future musical projects. Tonight’s performance at the Barbican saw Jónsi and Alex join forces with the London Contemporary Orchestra to commemorate the 10th anniversary of its release.

The first half of the show however is taken up with All Animals, the EP that was recorded at the same time as Riceboy Sleeps. Very much a prelude to tonight’s main piece it slowly presents itself as a clean, choral-supplemented orchestral drone that, live, recalls the likes of Stars Of The Lid. Towards the end a mild electronic distortion creeps in, and it’s at this time that the audience are encouraged by conductor Robert Ames to empty into their mouths the popping candy that had been placed on seats before the show had begun. It adds a novel, extra sensory dimension to the experience and the lingering sweet taste soon finds a musical equivalent as the musicians re-emerge after an interval to play Riceboy Sleeps.

It begins with Happiness, all rich strings and melodic refinement, and it’s immediately apparent that it’s also very much touched by the hand of Jónsi. It is the sort of track that, if on a Sigur Rós album, would be easy to imagine leading straight into an imposing tour de force like Hoppipola or Festival but the follow up tonight shows how, here, subtlety and restraint is key. Atlas Song intertwines a beautiful sonic drift with a hopeful build and delicate choral waves. Jónsi alternates between playing bowed guitar and singing from the back of the orchestra while Alex coaxes gentle sounds in more conventional style from his guitar.

Stokkseyri shows how the piano and choral moments tonight are more pronounced than on record (due to David Handler’s tweaked arrangement for orchestra) and by this stage it feels like being submerged into a calm, ambient pool. Boy 1905 is a short, purifying choral centrepiece, if not quite replicating a cathedral of sound then certainly conjuring a picturesque, stained glass windowed chapel of voices. It’s hard to avoid comparisons to the holy minimalism of Arvo Pärt also.

For the second half of the album we very much move into ‘music of the clouds’ territory, the voices of Jónsi and the choir integrating more closely alongside the orchestra. Daniell In The Sea soundtracks an escape to an alternative, enchanting land and Howl and Sleeping Giants extend it further. The last year has seen Jónsi and Alex perform their Liminal ambient piece and it’s easy to trace its origins back to Riceboy Sleeps. With Sigur Rós seemingly on hiatus it feels this is a place Jónsi may be happy to reside in for the foreseeable future. As the music fades away a standing ovation follows, a suitable end to a sumptuous and serene show.