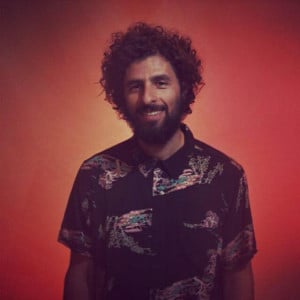 José González likes playing in churches. Apparently, it feels as if someone is watching. Someone other than the sell-out crowd in the pews, presumably. Religious inclinations aside, they seem to suit him as well.

The usual sound diminishing qualities of the steep alcoves in the Union Chapel only serve to enhance the sparse set up that he chooses to perform with tonight. Scenery might support then, but it’s the content rather than the delivery which lets him down. Technically gifted, at times spine tinglingly raw, but too much of the same trick combined with a knack of making other peoples songs his caveat, make for a lop-sided performance.

Without doubt, González does have that rare ability in a singer-songwriter: to captivate from the first note. His unique playing style, classical guitar plucked to form an encompassing arrangement of high and low notes can grab your ear and make your hairs stand on end. As he begins tonight with Hints, from 2005’s Veneer, the strings and quivering vocals drift up to the rafters and echo almost eerily around the chapel. It sounds like there is almost nothing to it. Probably because there isn’t: González is hunched over the guitar with just a solitary spotlight for company.

Likewise, Heartbeats, which should bring to the mind memories of Swedish electronic genii The Knife, not television sets or bouncing multi-coloured balls, is a highlight. With nothing except for superb arrangement and Scandinavian love-lorn pondering to carry it through, it’s effortless and masterful at the same time.

José’s problem is that he masters his niche far too infrequently. The addition of an extra vocalist and percussion section does little to boost the meandering way that many of tonight’s tracks, especially from recent album In Our Nature, blend into one another. Killing For Love has the composition but ironically lacks the passion, whilst the title track is laid back and pedestrian even for an artist who is almost horizontal. You just can’t help but think that for a performer who relies so much on that unique talent, there is a distinct lack of showmanship or effort to make this into an event.

Again, it’s the cover versions which save the day. A cover of Massive Attack‘s Teardrop does justice to the original, keeping the unsettling ambience, but showcasing some more emotion than we have seen yet tonight. As part of the encore, we are treated to Kylie Minogue‘s Hand On My Heart, an odd choice perhaps, but a perfect example of what González is really good at: taking a good song, making it his and releasing it in a lackadaisical, yet inch-perfect way. The sentiment (of a painful break up) is lost on many of the couples that begin to canoodle through it, but if anything that’s testament to González’s ability to place all attention on him when he peaks.

The church may suit González, but in surroundings less grandiose, you’d expect his ability to captivate to decrease even more. If there is someone watching, it’s probably just with one eye, keeping a look-out for the glimpses of raw and undeniable talent that exist, but refuse to stay around for long enough to make him truly special.