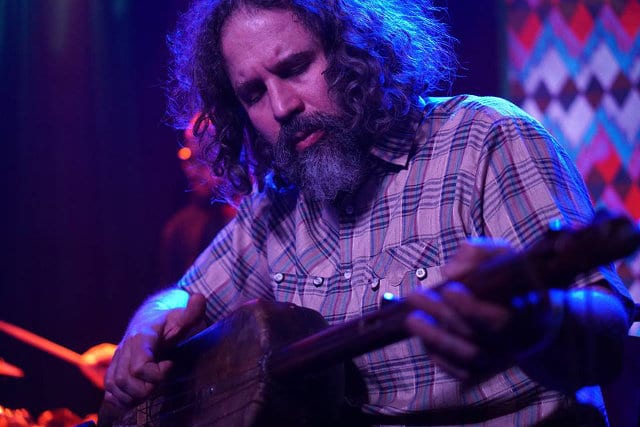 A reverential and slightly eerie silence descends as Joshua Abrams and Natural Information Society take to the stage at Oslo, unusual these days for a London show, but indicative of the meditative approach to music that this band adopt.

This incarnation of Natural Information Society are an entirely distinctive unit before anyone has even played a note. Where else would you find a quartet consisting of guimbri (a stringed instrument originating from sub-saharan Africa), harmonium, bass clarinet and percussion? What follows the awkward silence is a remarkable sustained and coherent one hour set of the kind of music where it is hard to determine where composition ends and improvisation begins.

This is not a straightforward case of free improvisation. Such musical adventures usually involve subtle communications between the individuals in the ensemble, often with the various players on a more or less equal footing. What is particularly interesting about the patiently unfolding introduction to this set is the extent to which Abrams controls the proceedings. His guimbri is the first sound we hear – and is is a more biting and incisive sound that it seems on his recordings (but also rich and powerful too).

From here, he appears to dicate the point at which the other musicians should enter the arrangement. Lisa Alvaredo’s harmonium begins to provide a sense of constancy – a bed over which the other musical contributions can expand. Jason Stein’s bass clarinet contributions begin smoothly, but he will later explore more guttural territory on the instrument. Perhaps most striking of all is Mikel Avery’s percussion set-up – a minimal kit, with the resonant head of the bass drum carefully muted, a snare drum, a ride cymbal and a hi-hat. He has a floor tom available, but rather than using it as a drum, it is set up as a tray for a fascinating array of bells and blocks that provide much of the textural interest in this music.

For the most part this is defiantly minimalist and trance-like music, but it actively encourages attention to detail on the part of the listener. Almost by osmosis, subtle shifts become detectable – such as the slight displacement of a rhythmic motif or the addition of one single note to extend a pattern. It is possible to see and hear individual choices being made – such as Lisa Alvaredo’s purposeful echoing of bass clarinet phrases to create a dialogue, or Mikel Avery’s sudden switch between a stick and a soft mallet.

For a group of musicians so attuned to the acoustic properties of their instruments, it initially seems as if Oslo might be an inappropriate space, but any such concerns are quickly assuaged in the long groove sections of this piece. At one point, it even sounds as if Avery is channeling Joseph ‘Zigaboo’ Modeliste from The Meters – one of the more intense of these grooves would not have sounded out of place on a Lee Dorsey record.

So, whilst this music is a resolutely serious affair (Abrams plays with his head down much of the time), the grooves engage the audience physically as well as cerebrally. The set seems to veer thoughtfully between Steve Reichian minimalism and greater rhythmic impetus. Whilst his guimbri often performs a more foundational function, providing deeper resonance, Abrams also takes time to cut through and play with more of a flourish.

There is a greater degree of playfulness towards the end of the set, as Jason Stein explores a more abrasive sound world on the bass clarinet, and Avery injects some unexpectedly conventional jazz language (a quick burst of 3/4 swing seems to kick things up a gear). The home straight finds the band bursting into Maroon Dunes from last year’s mighty Simultonality album, Abrams finally permitting himself a broad grin as the music succeeds in being relaxed and in control but also blisteringly intense. It’s an impressive conclusion to a consistently engaging and transporting musical experience.