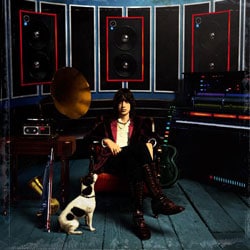 As the decade draws to a close, The Strokes’ debut, Is This It, has been named by many as the best album since 2000. A fair point, but it’s alarming to see the man who wrote that album now fronting a band struggling to get to grips with the noodling, ’80s loving songs from his solo debut, Phrazes For The Young.

On record, the cheesy synth lines and nu-wave guitars sound pristine and the complicated melodies clearly defined, but in a packed Forum it all ends up sounding like four bands playing at once. In the middle of the musical quagmire, Casablancas drawls and stumbles around, forgetting his lyrics or aimlessly scrunching his hair.

Dressed in what looks like leather trousers with matching hoodie, he’s a strikingly different figure to the effortlessly cool 23-year-old that helped reinvigorate a tired music scene in 2001.

One of the main problems is that the new songs are all over five minutes long, so what starts as an interesting melody or keyboard sound (as on the brilliant 11th Dimension) soon descends into repetitive dirge, with the five (!) guitars overbearing any of the songs’ subtler moments.

The pace of the set doesn’t help either, with the strange wobbly country of opener Ludlow Street hardly igniting a crowd that are itching to get involved, but are constantly kept at bay. It’s only on the fantastic I Wish It Was Christmas Today, his cover of the Saturday Night Live standard, that the mood of abject indifference is lifted. Not even a stripped down Strokes b-side works, with Casablancas forgetting the lyrics and having to re-start the third verse.

It’s not all bad. Out Of The Blue is a brilliant mix of cascading keyboards and that old familiar clipped guitar riff, whilst 4 Chords of The Apocalypse swells into a touching rock ballad that leads to some man-on-man hugging and general beer swilling. It’s during these moments that you remember how good a front-man Casablancas can be, as he nonchalantly glides form one side of the stage to the other, or when he unexpectedly launches himself at the front row to shake some hands.

Unfortunately, the sound lets him down and though the songs work on record, in a live setting they lose your attention too quickly to really make an impact. At its worst, it feels as if Casablancas hasn’t really bothered to put the effort in, even mentioning earlier on the tour that he’d not been showing up for rehearsals. Perhaps, like most people tonight, he’s just been waiting for The Strokes to reconvene.