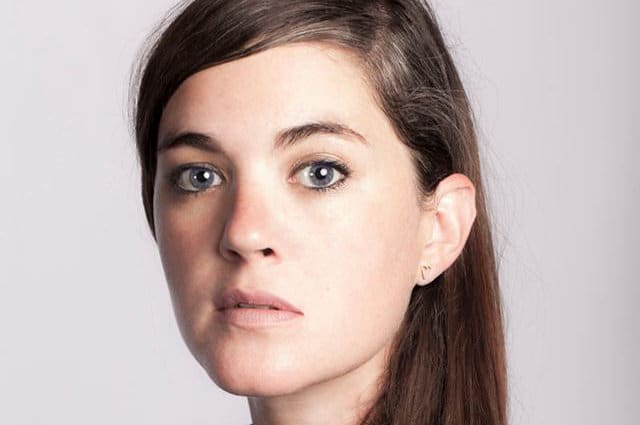 The blueprint for each of Julianna Barwick’s four albums to date may have largely remained the same, being primarily centred around her celestial, looped, overdubbed vocals, but each release has also contained subtle shifts forwards and sideways. Latest album Will sees her particular style of vocal polyphony further consolidated but it also edges out in other directions. There’s now a greater equilibrium between her voice and the other instrumental contributions, and more in the way of overt song structures, although still draped in lush, opaque ambience. It’s evident in the songs from Will that are played at tonight’s show at the Pickle Factory in east London.

St Apolonia may not open the show but it still sounds like a condensed overture of sorts, although tonight further amplified, and with greater overall presence. The appearance of Maarten Vos on cello helps it to fully ally the worlds of ambient and modern classical, and is not the only track tonight to momentarily recall the purity of A Winged Victory For The Sullen. The underlying electronic murmuring of Nebula meanwhile contrasts against the clarity of Barwick’s vocal that has the freshness of a new dawn.

Heading Home encapsulates much of the new album, tonight Barwick playing the watery, remote piano lines on an analogue synthesiser. Its fragility and expressive uncertainty recalls Grouper and tonight suggests what listening to music through a rain-obscured windowpane may sound like. Her music may be quite distinct to that of Holly Herndon but it feels valid to draw the comparison, especially in how they invest so heavily in the human voice. Tonight, those moments where Barwick pushes her voice to the outer limits lend the performance a more corporeal, almost gothic feel.

Big Hollow is the emotional centre point of the new album, walking a lonely and sorrowful path, and it assumes a similar role in the live set tonight, sounding irredeemably sad and seeming to reflect some wider, unresolved pain. Elsewhere, there are moments where she meticulously builds small pyramids of sound, and can be seen to be preparing herself for the emotional ascent that lies ahead while she plays. To watch her anticipate and articulate such moments is a powerful experience and confirms the devastatingly beautiful sounds she’s capable of relaying.

Towards the end of the show she dips back into 2013’s Nepenthe on The Harbinger, shining beams of light through heavy, overcast skies. In the crowd eyelids involuntarily close, faces tilt upwards, bodies and minds are immersed and heart strings are pulled. Much of tonight felt like stepping inside a purifying musical cloud or participating in some form of aural detox by means of rich, emotion-heavy ambient sound. It’s a skill and specialism that Julianna Barwick shows no sign of losing either on album or in live shows like these. The only negative tonight is that we’re thrust back out so soon into the very real world of Bethnal Green. It proves that the title of Barwick’s second album from five years ago, The Magic Place, still has wider relevance to the music she creates today.