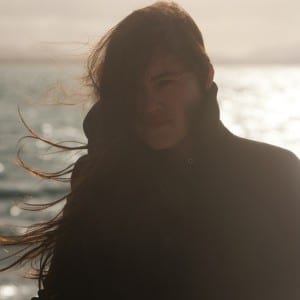 Julianna Barwick is playing the Purcell Room – a cosy corner of the Southbank Centre – as part of Yoko Ono’s Meltdown. The curator isn’t here to explain the reasons behind Barwick’s selection, but it’s easy to see why the Brooklyn-based musician is on the bill. Barwick’s music – like that made occasionally by Ono – exists at the intersection of pop and the avant-garde.

Which isn’t to say that Barwick’s music is wilfully difficult or inaccessible. Anyone who’s found beauty and pleasure in Vespertine, Loveless or Spiderland is likely to enjoy Barwick’s marvellous 2011 album, The Magic Place. Tonight Barwick performs a number of selections from that album, alongside new tracks (presumably) off the forthcoming follow-up, Nepenthe.

Barwick makes predominately a cappella and mostly wordless music built from looped vocal exercises and underpinned occasionally by ambient FX, clanging piano notes and dubby basslines. It’s never going to make for the most visceral of live music experiences. A cruel observer might point out that, with Barwick performing alone beneath projections of crashing waves and the undulating surface of the sea, her performance resembles some kind of celestial Powerpoint presentation.

And yet, provided one is willing to meet Barwick halfway and lose oneself in the music, this is a truly captivating performance. Watching Barwick painstakingly build her beautiful music from the bottom up is a fascinating experience. Barwick will sing a brief, wordless vocal into her microphone; she’ll then loop that vocal part before adding another, and another, and another – each one cross-hatching over the others to create an astonishingly rich composition.

It sounds complicated and, from a technical point of view, it probably is. Yet Barwick makes it seem effortless – while performing, she barely shifts from her position of choice: eyes fixed parallel to the front lip of the stage, one hand on her mixing desk, right leg cocked. Wisely, Barwick chooses not to break the spell by talking excessively. When she does address the audience, however, she’s quite charming: cracking jokes about MySpace nostalgia and waxing enthusiastically about playing in London.

The new tracks don’t, on first listen, sound like a huge departure from The Magic Place, but this isn’t a concern. Barwick’s sound might be limited, but within those limitations are infinite possibilities. This was an utterly captivating performance from an immensely talented musician.