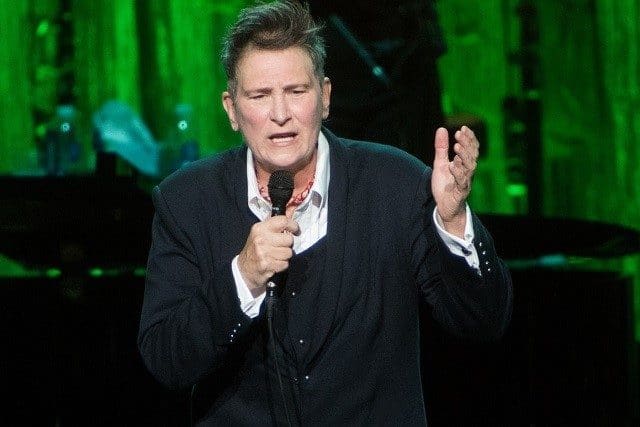 The lights go down, a familiar rhythmic patter strikes up, and the chords of Save Me, the opening track on k.d. lang’s once ubiquitous Ingenue album, linger softly and sweetly. The scene is enhanced by some lush and evocative pedal steel guitar flourishes from Rich Hinman. The curtain rises, revealing lavish drapes, some powerful backlights and the dapper, elegant figure of k.d. lang herself. Lang is greeted with applause and screams so raucous it almost feels as if we have been teleported back to Shea Stadium for the arrival of The Beatles. This is clearly an artist who has crafted and maintained a strong connection with her loyal fanbase. Save Me being one of the more delicate moments on this most refined and sophisticated of albums, the music is briefly drowned out by the sound of genuine elation.

Never the most prolific of artists and, if recent interviews are to be believed, currently somewhat reluctant to create new music, Lang recognises the significance of this material for both her audience and herself. The arrangements mostly remain faithful to the recordings, blending Lang’s country beginnings with cabaret and torch song elements, and her excellent band deliver them with subtlety, nuance and grace. There are particularly excellent contributions from pianist Daniel Clarke (who adds extended harmony and a sense of dinner club jazz) and from elaborately-coiffed Brazilian acoustic guitarist Grecco Burrato (Burrato is apparently keen on yoga and Lang later suggests that his hair contains “no product” but is rather the result of two hour handstands). Lang proclaims this event as being in celebration of the “two year anniversary of the 25th anniversary of Ingenue”, a milestone that means that “we are now a bunch of gay seniors”. Although she promises to keep talking to a minimum, the show deftly balances languid and melancholy music with theatricality, flair and often ribald humour. Lang jokes while introducing the backing singers that one of them is exactly “nine months and two weeks younger than Ingenue…I begin to wonder if maybe indirectly…” Not all the band members are of an Ingenue-inspired generation, however. The outstanding bassist David Piltch has been working with Lang for over 30 years and played on the original album, providing a link back to its creation.

The undimmed power of Lang’s voice becomes abundantly clear early on, as she demonstrates her supple phrasing, extraordinary dynamic range and purity of tone on The Mind Of Love (with flexible microphone technique to match). Lang is a peerless communicator of feeling and emotion (not least on the mesmerising Wash Me Clean), although she is also prone to moments of mischief, beginning the unusually sprightly Miss Chatelaine by throwing a series of shapes. Ingenue’s first half is lush and immersive, establishing a compelling mood, but it is the album’s second half where things start to take flight. Lang’s breathtaking control of dynamics and articulation are at their peak on Still Thrives This Love, and the band stretches out impressively on a superb slow building version of Outside Myself, perhaps the evening’s highlight. Constant Craving inevitably receives the warmest welcome, but Lang still imbues it with a richness and depth that makes it feel fresh and unusual.

Following the conclusion of the album, Lang spends a generous period of time introducing the band, alive to the potential for both humour and a sincere acknowledgement of their skills and talents. She then proceeds to delve a little deeper into her back catalogue, with an elegant and involving take on I Dream Of Spring (from 2008’s underrated Watershed album). Perhaps most pleasing here is the inclusion of the atmospheric Honey and Smoke from Lang’s recent collaboration with Neko Case and Laura Veirs, not least because their tour together never reached the UK. We then get three songs from the master Canadian songwriters inspiring Lang’s outstanding Hymns of the 49th Parallel album – Joni Mitchell’s Help Me, a malleable recasting of Neil Young’s Helpless and, most dazzling of all, a tumultuous take on Leonard Cohen’s Hallelujah, a song Lang is more than capable of claiming as her own, despite the numerous attempts by other less able singers to do so. Lang truly is a class act and one of the greatest singers currently at work in any genre. A protracted standing ovation brings Lang and band back to the stage to dedicate Sing It Loud to young people protesting around the world, from Greta Thunberg to the Parkland High students demonstrating in favour of gun control in the USA. It’s a rare moment where the outside world intrudes into Lang’s meticulously crafted, insular dream world.