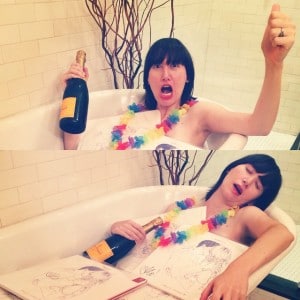 Never knowingly under-glittered, Yeah Yeah Yeahs frontwoman Karen O takes to the Bush Hall stage in a shimmering and be-fringed blue ball-gown, but that’s where any similarities to her day job end. The watchword this evening is “intimate”, from the venue (Bush Hall’s capacity is only 400) to the musicians on stage.

Tonight she’s playing with the most basic of backing bands, acoustic guitarist Holly Miranda augmented by support act Moses Sumney’s subtle beat boxing and minimal electric guitar, and though occasional guest spots float in an and out (at one point a time warp opens up from 2003 and drops Har Mar Superstar onto the stage to play guest tamborine) things are kept stripped down. A neon sign reading “Crush Palace” is the only real stage dressing and the lights are kept low. It’s the perfect setting for O to showcase Crush Songs, the intimate, dreamy hangover-friendly solo record she released earlier this year, which in its own low-key, unobtrusive, bittersweet way has become one of the albums of the year.

With such un-showy dressing the songs really do need to carry their weight, and though it’s their slightness that makes them work so well on record, they’re robust enough to captivate the room in a live setting too.  Opening with NYC Baby, Ms O sets her musical stall right from the start, building gentle layers from the three vocals on stage and allowing the choruses to do the real work. The songs feel a little more polished than their recorded versions, mostly due to Miranda and Sumney’s skills, but still maintain their fragility, which is something not easily done when dealing with music this delicate.

Some of the pain etched into the lo-fi recordings has gone, but especially on Ooo and Rapt there’s enough melancholy left to ensure few watching remain unmoved. Not that this is all misery – an all-too-brief tribute to Michael Jackson, King, sees the singer don a single silver glove, her Har-Mar-enhanced band crouch low for Day Go By, then pop up O’s shouts of “my pain is gone”, and the closing Native Korean Rock has a Moldy Peaches-esque bounce.

A few reports of last night’s show hinted at a Radiohead cover, although in reality that mostly comes from Holly Miranda teasing a verse and a chorus of High And Dry to showcase her breathy voice in the encore. In fact this set focusses almost entirely on Crush Songs, with no nods to the Yeah Yeah Yeahs or the Where The Wild Things Are soundtrack. Some might call that a missed opportunity, but what we’re presented with here is satisfying enough without having to be propped up with past glories. All in all, rather special.