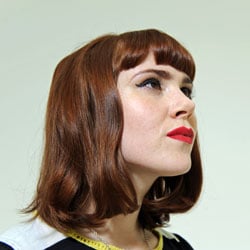 Imagine Alex Turner had made a time machine and travelled back to the 1960s to meet a fecund Pam Ayres. He wooed her with a gritty urban lay, and she responded with a bawdy comic ode. Then, Turner takes their progeny forward in time; Brett Alaimo, for such was his name, grew up and inherited the musical stylings of his old man and the desire to make laughs-through-poetry just like his putative mother.

It’s an odd fusion, but it somehow works. Alaimo returns to the stage as guitarist in headliner Kate Nash’s ragtag backing band. They resemble nothing so much as a collection of urchins she’s picked up on the way through London’s East End to this Bethnal Green space. Nash takes to the stage in a crocheted multicoloured poncho, fringe set-square straight, and smile as wide as a Cheshire cat’s, before embarking on a set dominated by new material and saved from looming monotony by a freak event.

New song Paris angrily repeats the phrase “You’ll never listen to me”. The differences musically between Nash and Alaimo are few, but what Nash does have in spades is charisma. New single Do Wah Doo is a ’60s girl-group styled tale of unrequited love. Rather pessimistically, Nash is disappointed by the lack of dancing to two new songs, so before she launches into Mouthwash she berates the onlookers for being “boring and annoying”. But she does it with a grin, so no-one seems too bothered by the criticism.

The new songs are all familiar Nash territory. Kiss That Grrrl is a warning for any would be filanderer, delivered with innocent mockney charm, and another step on the road to a doo-wop revival. Take Me To A Higher Plane is a slight departure for Nash with an angry country air which, combined with Nash’s cheeky persona, recalls Piney Gir. This is no bad thing.

By the time Nash gets to I’ve Got a Secret – her song about treating homosexuals right, yeah? – her unabated chipperness and logorrhoea are beginning to grate. And just as one can start to feel the enthusiasm of the audience sag, Nash is saved by, of all things, a powercut.

After short-lived confusion, Nash and one of her band, both toting acoustic guitars, take to the stage. Favourites such as Birds, Foundations and Pumpkin Soup inspire an audience sing-a-long, and Nash copes admirably with adversity. Although she runs out of acoustic material, she ends up gamely trying to teach the audience the chorus to Kiss That Grrl.

The power comes back up, and Nash soldiers on for another five tracks: four new ones, all much of a Nashness, with Merry Happy sounding like it would’ve been the planned set’s denouement in between. Nash is a possessing performer, whose youthful levity makes up for the shortcomings of her songs. Nevertheless, without the forced test of her mettle of the powercut, this gig would have had a certain something lacking.