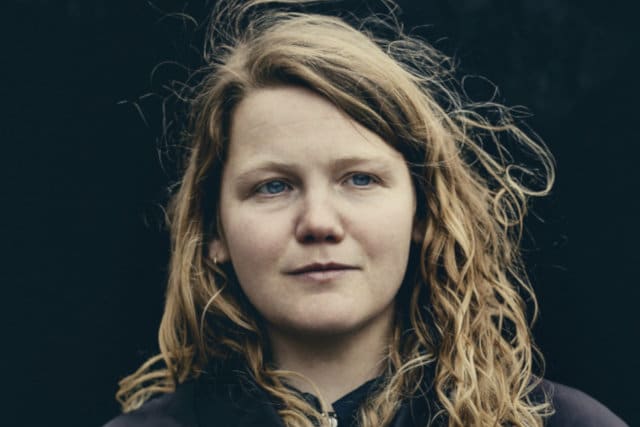 Celebrating International Women’s Day, the final evening of the 2020 BBC 6 Music Festival did the obvious thing and staged five amazing solo women in the Roundhouse, recorded their sets and dropped them on the BBC iPlayer for those not lucky enough to be in the room at the time. Three of the stars released new albums in the last few months, while the other two have much anticipated new collections incoming. While the length of the sets were necessarily shorter than they would be for headline sets of their own, all of the artists had enough time to get comfortable and give good accounts of themselves.

The programme starts amicably enough with a song from Nadine Shah‘s last record Holiday Destination to set the tone. Evil, with its deceptive assessment of feminine selfhood and the perils of modern religion, showcases what makes today’s opening act such a captivating draw. Supremely confident and constantly defying expectations, she doesn’t rest on her laurels and when a heckler asks for a song from an album released earlier in her career. Instead she laughs innocently, politely declines the request and acknowledges that she’s here to primarily perform contemporaneous work for us. On the eve of releasing her fourth album Kitchen Sink, Shah proves to be a mesmerising and seductive amuse-bouche and, taking cues from Juju era Siouxsie Sioux, she casts a mischievous spell. Dedicating a cover of the jazz standard There Is No Greater Love to late friend and local hero Amy Winehouse, it is the only moment where we are permitted an opportunity for wistfulness.

The casual dismissal of past glories highlights what will make all of the women who perform today stand out. Each of these seemingly disconnected artists has something new to bring to the table, often caustic and uncompromising in their vision, and it’s this defiant streak and sense of personal control that binds them to one another.

Jehnny Beth is apparently ‘The Man’. Appropriating the campy bravado of tired machismo, hair slicked back and power suited, the French force of nature prowls and purrs, asserting her dominance, over a cavalcade of chunky electronic beats. Freed from the power structures she’s become associated with as member of Savages, this solo work is more intimate yet retains that same intimidating force of will. New song Flower investigates the sudden allure of curvaceous bodies and a desire for intimacy hindered by a fear of rejection. With its Sapphic explorations of reopened wounds and lightning strikes, it makes cheeks blush and hearts tremble. Her upcoming debut solo album To Love Is To Live just became even more anticipated.

Watching Scotland’s classical-math-pop genre buster Anna Meredith perform, her actions seem not initially to scream ‘control’, seemingly random as they are. Her music is wonderfully ramshackle, combining the euphoric beat drops of EDM with the pomp and circumstance of the last night of the Proms. She jumps around like a sugar-addled toddler, banging away on the drums in a decidedly anxious manner, erupting with restless energy beside her omnipresent tuba player. Aware that timing is limited, Meredith jokes about not having the capacity for chit chat and races through recent tracks like Sawbones and the Saint Etienne-go-to-Ibiza banger Inhale Exhale, barely giving us a moment to catch our breath and steady our heart rate. And of course calling card Nautilus is present and correct.

What is there left to say about Kim Gordon? Even emcee Don Letts knows he hasn’t got time to list her numerous achievements, including but certainly not limited to Sonic Youth, so just beckons her out from backstage. Resplendent in gold, with three-piece band following behind, Gordon runs through her entire solo album No Home Record without pause. Critiquing the dystopian era of digital professionalism, intrusive commercial excess and personal surveillance that we now find ourselves in, she still bristles with curiosity and in an age of over sharing, when recent single Murdered Out, a trapped out Shangri La’s for the internet age, blares out, she leaves us wanting even more.

And so to Brockley’s two-time Mercury-nominee Kate Tempest, who brings proceedings to a close. Whilst a faintly divisive choice for headliner, there is no denying that the young poet has complete authority over crowds. Strip away the early ’90s dark pop sounds and turn down the strobe lights that often muddy the message, Tempest has a lot to say, if not a lot of time to do so. Prowling and sullen, she has a catalogue of public indiscretions to mull over, and now obvious truths to air. Language is used to punishing effect. As grievances are brought to life, made forthright, our bodies stop moving and we find ourselves transfixed, transmogrified by the moment. Change is inevitable, immutable – and tonight these five performers showed us why it should be embraced.