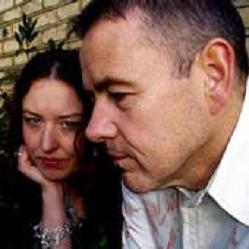 There is peace to be found on London’s Oxford Street after all. Well alright, not on the street itself, which is still teeming with tourists, but just a couple of stones’ throws away, two musicians are enjoying the gentlest of arguments.

They might not be on tour yet, but Kathryn Williams and Neill MacColl are already bickering like a married couple. “You sing like a girl!” accuses Williams. “You look like a man” retorts her accomplice. “Is it me starting this one or you?” It’s both of them this time, and the realisation brings refreshingly open laughter.

The truth is this light hearted banter brings a little frisson to a musical meeting of minds that produces some beautiful, intimate singing and guitar work. The intimate surroundings of the Gibson Guitar Rooms prove an ideal setting, much of the audience seated on the floor to revel in the musics soothing tones. A near total silence accompanies the light strumming of the two guitars, and the withdrawn yet clear vocals – perfect conditions for Williams and MacColl to make maximum impact.

The two are soon into their uncomplicated stride, Williams often taking the vocal lead but never dominating, so that MacColls intelligent and thoughtful harmonising comes through. While the songs are gentle, often kind and almost always heartwarming, there is the occasional segment of bitterness. “Ill sweeten you like sugar when the world has been fucking with you,” they sing together in close harmony. It’s one of those moments where you want to hit the rewind button quickly, and even when its repeated loses nothing of its effect.

Elsewhere the flowing Blue Fields, with its “big net catching colours”, makes a lasting impression, as does the single Come With Me, following the trend where Williams’ often humourous introductions give way to suddenly direct asides or declarations.

The stage is packed with amplifiers and a drum kit – mercifully, none of that is pressed into action tonight. And while Williams freely admits she used to suffer from stage fright, it’s clear here how she has managed to channel her fears into beautiful musical performances.

The duo begin a long nationwide tour on March 16th, taking in the length and breadth of the UK – but Williams is unprepared. “I must find someone to look after my cats,” she remembers. Well in case she’s unable to find someone in time, putting her new CD on repeat should keep them calm.