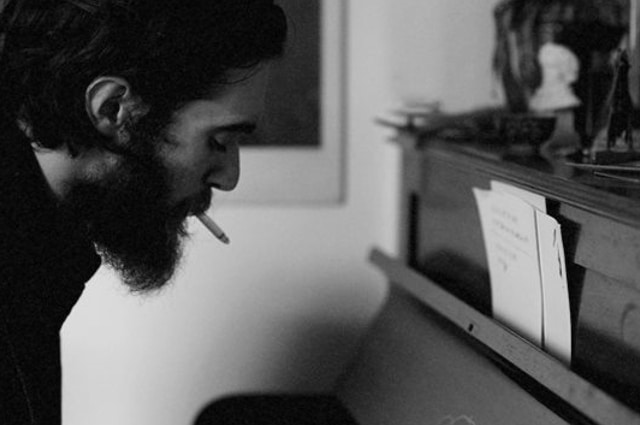 From the moment Keaton Henson walks out into the Roundhouse there’s a palpable sense of general vulnerability. The stage is sparse, housing only the tools of the trade and a crowd of soon to be glowing bulbs that hang precariously over Henson and the string section that accompanies him tonight. It’s well documented that he suffers not just from stage fright, but also from debilitating anxiety that makes it hard for him to leave his home in Richmond let alone be the sole focus of the attention of a room full of expectant people. It feels like this is an evening hung on the most delicate of threads.

He eases himself into the situation with Elevator Song, taken from 2014’s superb Romantic Works. It allows him to duck behind the piano and let the strings bear most of the load. It’s a befitting opening given Henson’s anxieties. He wrote the song in response to a breakdown he had in an elevator in Glasgow and its repetitive piano line radiates that claustrophobic dread. He may have thought attention would be drawn to the swirling strings, but although he merely repeats two notes throughout they are played with such intensity it’s difficult to take your eyes off him.

There’s no doubt Henson has an acute sense of this and clearly feels everything unbearably keenly. His sensitivity was reflected powerfully on Birthday’s unflinching exploration of lost love. His delivery of Sweetheart What Have You Done To Is is saturated in feverish desperation – it’s pain in Technicolor – and although incredibly moving it’s quite difficult to watch Henson expose it so fully.

It’s not just the content of his music that creates an uneasy atmosphere; his physicality also emanates disquiet as he hunches in his chair, knees twitching, repeatedly rubbing his face. Songs are prefaced with pregnant pauses as Henson looks to the skies and exhales like he’s about to jump from a plane. You get the feeling Ren Ford is his parachute. The cellist had a substantial input on Romantic Works and is described by Henson as a friend. Ford keeps a watchful eye and Henson often looks to him for reassurance.

He certainly gets plenty of reassurance from the audience who applaud each track vivaciously: You gets a special reception, somewhat of a signature tune for Henson. It’s a great vehicle for his voice which somehow despite its delicate and fragile nature has an innate power. He informs us he’s been working on a new album for over two years and he débuts three nameless tracks over the course of the evening – the first sounds like many of the self doubt filled guitar torch songs on Birthdays – but the second sounds far more epic in scope, filled with strings and led by Henson’s piano.

In many respects it’s a little baffling that Henson would choose to be part of the Roundhouse’s ‘In The Round’ series, by its very nature an intimate, sharply focused format. Although his music lends itself to such a setting, it also invariably puts a larger pressure on him. That pressure may be why the set is an economic hour, which to be honest is fine. Even experienced vicariously it takes its toll. That is not to say the evening is all doom and gloom as he’s not without humour. He’s clearly aware of his reputation and acknowledges how hard the evening is for him, but also initiates light banter with his fellow musicians and the audience. And while you could uncharitably label his as ‘sad bastard music’ it’s so often the case that the sad songs are the prettiest and this idea can be applied liberally to his material.

He concludes with a cover of Leonard Cohen’s Hallelujah, which he informs us he will regret not having written until the day he dies. He’s often compared to Jeff Buckley and in this moment he inevitably most reflects him – it’s an earnest, rousing version which brings the crowd to their feet. And, with that, he’s gone. On the evidence of this evening’s performance we can only hope he can muster the courage to face a crowd again.